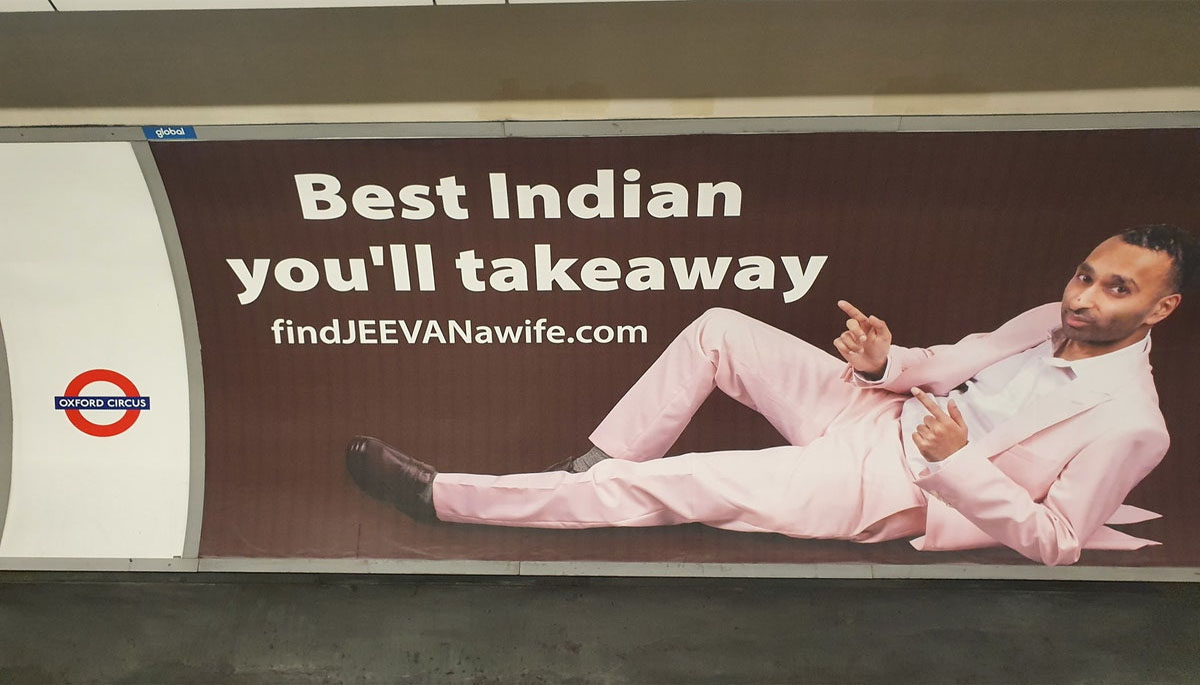 Looking up at a billboard with my face plastered on it in London’s busy Oxford Circus tube station was completely surreal.

I couldn’t stop smiling and laughing as people on the platform began to clock it was me. For two full weeks, my face greeted commuters on their journey, accompanied by the caption ‘Best Indian you’ll takeaway’ and a link to my website, Find Jeevan A Wife. And I have absolutely no regrets at all about doing it.

Since I set up the billboard on 3 March, I have had over 300 responses from potential matches. Now the ad is down, I have arranged some dates and many more coming up in the next few weeks I have also been offered documentaries and TV opportunities that I am currently considering too.

I knew what I wanted from the campaign — and to me it made perfect sense. The billboard was right in your face when waiting for a train, everyone’s on their phones while commuting — so it would be natural to then search my website after seeing the advert.

I’ve been single for three years and have been looking to meet someone for a year. I knew exactly the type of person I wanted to respond to the ad: Someone who is fun, can match my energy, and who has a positive outlook in life — always making the most of things. However, I’m trying to keep an open mind because when it comes to love, personality triumphs over everything else.

I was on the usual dating apps before — regularly using Tinder, Bumble, and many others. In my experience, people on dating apps tend to focus more on texting, rather than actually meeting up — so it appears to be a lot less serious at times. It’s more of a ‘let’s see where the chat goes’ situation, rather than ‘let’s go out in person and see if we’re really compatible.’

Some dates came out of it but I find the chances of success on these apps are declining. As someone looking for a serious relationship, it wasn’t working for me. Previous relationships I’ve had have come from meeting girls at social events, but Covid-19 has made people more reluctant to go out as much, so I wanted to do something a little bit different.

The idea for the billboard came about in January this year, after seeing 29 year-old Mohammad Malik’s billboard adverts. It struck me that I wanted to stand out, do things slightly different and refine Malik’s strategy. And once I have something set in my mind, there’s no going back.

After around a month, and a round of photography, designing the art work and website, the idea started to take shape. Then, I started having serious discussions about commissioning the billboard to help find me the wife I had been looking for.

Working in a tech company in marketing and sales, I knew a lot of experts that could help, so I enlisted James Arroyo, an application developer and colleague. He guided me on what website tools I should use to create the campaign and to create my design template.

I also found a photographer called Thomas Hensher and told of my vision and what I wanted the poster to look like — I wanted to be wearing a pink suit, while lying down and pointing to the air, because my vision was that the takeaway caption was going to be placed to the top left of the image so I wanted to be pointing as if to the caption. Initially, Thomas didn’t believe that I really wanted to do this.

Then, I contacted a company called Global, who manage the physical hiring of the billboards. They were in awe when I had to explain I was not doing this on behalf of a company, and was marketing… myself. In their words, it was the most unique idea they have ever come across.

Next, I had to decide on the location. My mind was set on Oxford Circus station because I wanted to pick the busiest station with the most lines, or with a lot of people changing at the station. It was directly in the centre of London, and it was perfect.

I then had to cost up the price of advertising in such a prime location. It was around £2000 for the print and production of the billboard for March, and for two lines. Initially, I didn’t tell anyone other than the people closely involved with helping it all come together.

However as soon as the poster went live, everyone I had kept in the dark obviously found out. They started seeing it for themselves in person, and then the pictures of it started circulating round all my WhatsApp groups as more and more people shared it.

News of the billboard even reached my cousin from the US — it was going worldwide! He actually filled out an application on my website himself, and then called me to ask if I had received it. There had been so many other messages that I hadn’t seen his. He then told me that he’d seen me on the US news, which was quite a bizarre thought.

My family and friends have shown nothing but unconditional support and positivity about my unconventional quest for love. A lot of them actually praised the braveness and courage of doing this and considered me even braver for wearing a pink suit on a billboard that’s going to be seen by thousands of people every day.

Like me, they think it’s a creative and a genius strategy (I never claimed to be modest), and hope I find the one. Now the poster is down, I have decided not to do another one as I feel it might look like a gimmick. In the beginning, I knew if I even got one person to respond, I would consider it a victory.

Luckily, I’ve got far more than one person — including lots of genuine replies from girls I am looking to set up dates with as soon as I can. I have been on a few dates already, but they have made it clear to me that they don’t want any details to be shared with the media or have any cameras on dates! So I have to respect that.

Those who feel as though they could be genuine matches have sent paragraphs of information about who they are, and some have gone to the extent of adding me on social media to grab my attention. I did receive some joke replies, which I expected to happen. It doesn’t bother me, however I didn’t respond to them — I focused my attention on those that made the effort to take the time out of their day to genuinely get in touch with me.

Hopefully, in running this campaign, people have been able to get a real sense of who I am. I have a great sense of humour, and I’m an adrenaline junkie and more of a fan of going on activities-based dates rather than ones that revolve around food.

To those who accuse me of just performing a cheap stunt, I’d say that life is a game of perspective. Positive people tend to support and want me to succeed in my campaign, but negative people will tend to accuse me of having a PR company behind me.

To be honest, I empathise with those people because they must be in a bad place if the first thing they do when they see my campaign is to call it a stunt or go over to social media and leave negative comments.

When you stop seeing things through the prism of what other people think of you, life gets remarkable. So if you love an Indian with a bit of extra spice to season your life up, then don’t hesitate to get in touch. Even though the billboard has come down, the website is running until I have found the one.

This experience has been a once in a lifetime opportunity. It’s also been an eye opener and quite touching to see a lot of people contacting me to share their story of how difficult they have also been finding it — modern dating is hard, so why not try something different?

I remain optimistic that I will find the one. My dating life certainly looks busy in the next few months, so here’s hoping I find the wife I’ve been looking for.