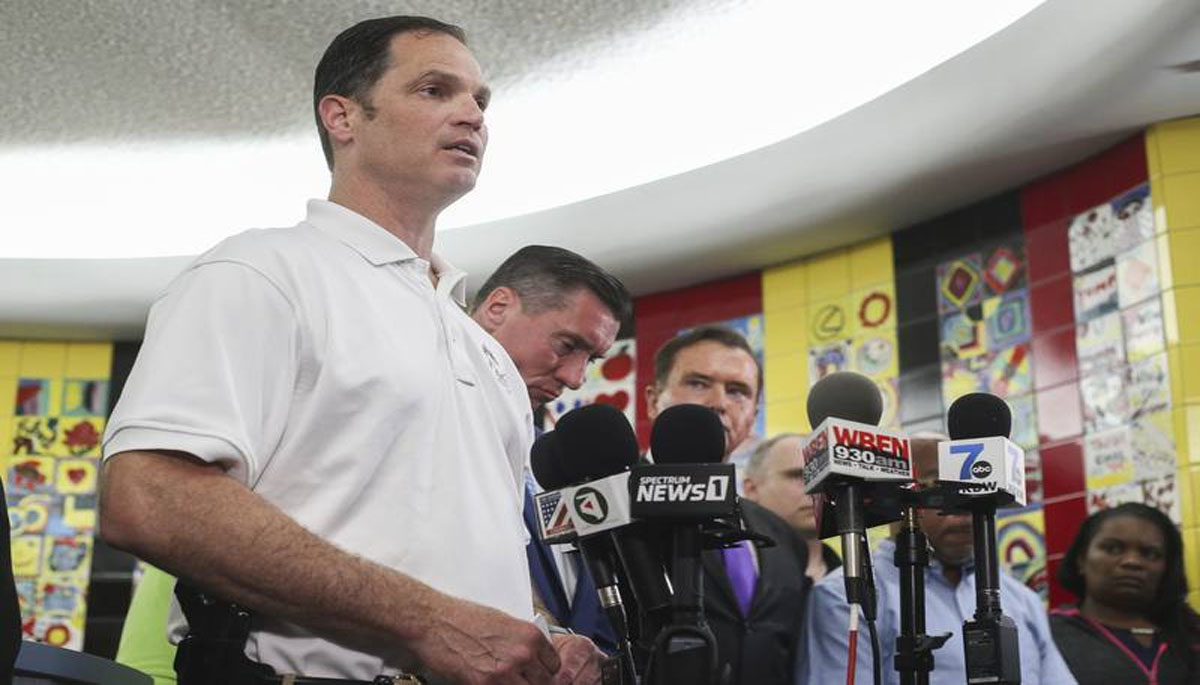 Joe Biden condemns ‘terrorism’ behind Buffalo shootingUS President Joe Biden on Tuesday condemned the mass shooting in Buffalo, New York, that resulted in the deaths of 10 black people as an act of terrorism and called on Americans to reject the “poison” of white supremacy.

“America, evil will not win. I promise you. Hate will not prevail. And white supremacy will not have the last word,” he said in remarks at a community centre in Buffalo on Tuesday.

Police said Payton Gendron, 18, carried out an act of “racially motivated violent extremism” when he opened fire at Tops Market on Saturday, killing 10 and injuring 13 in the predominantly black neighbourhood.

“What happened here is simple straightforward terrorism – terrorism, domestic terrorism. Violence inflicted in the service of hate,” Mr Biden said. Speaking to the families, the president choked up when recounting how one of the victims – Andre Mackneil – went to the grocery store to buy his 3-year-old son a birthday cake.

Prior to his remarks, the president and first lady Jill Biden paid their respects at a makeshift memorial outside the TOPS Market, where police say the suspected gunman targeted black people. After visiting the supermarket, the Bidens went behind closed doors at a nearby community centre and met the victims’ families.

“[Ms Biden and I] come to grieve with you. It’s not the same but we know a little bit what it’s like to lose a piece of your soul,” said Mr Biden.

In his strongest condemnation yet of white supremacy, Mr Biden slammed the “perverse” ideology that classifies one population as inferior to another. “Hate, that through the media, and politics, the Internet has radicalised angry, alienated, lost and isolated individuals into falsely believing that they will be replaced … by the other by people who don’t look like them,” he said.

Replacement theory can be defined as a racist ideology that falsely posits white people are being “replaced” by non-white populations, and has recently moved from the fringes of white nationalism into more mainstream Republican politics.

Police on Sunday confirmed they were investigating Mr Gendron’s online postings, which included a 180-page racist diatribe that frequently cited the conspiracy.

Replacement theory often identifies Jews as the culprits. At the 2017 “Unite the Right” rally in Charlottesville, white nationalists chanted “Jews will not replace us”. As a presidential candidate, Mr Biden vowed to fight for the “soul of America” after his predecessor Donald Trump failed to denounce the rally.

In his remarks on Tuesday, Mr Biden condemned “those who spread the lie for power, political gain and for profit”, without mentioning any specific individual. Senate Majority Leader Chuck Schumer, who joined Mr Biden in Buffalo, wrote a letter to Fox News executives urging the network to stop promoting the theory, saying it has been “injected into the mainstream” by the network.

“I implore you to immediately cease all dissemination of false white nationalist, far-right conspiracy theories on your network,” he wrote. Fox News host Tucker Carlson has previously accused Democrats of using immigration to consolidate political power.

“The country is being stolen from American citizens,” he said August 23, 2021. He repeated the same theme a month later, saying that “this policy is called the great replacement, the replacement of legacy Americans with more obedient people from faraway countries.”