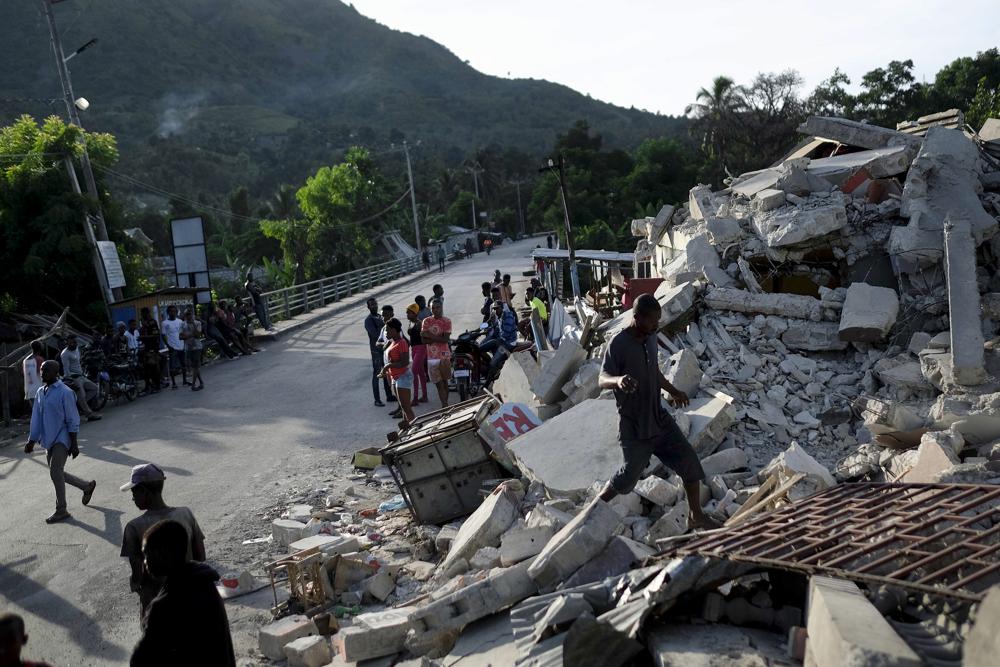 Not long after a powerful earthquake struck his Haitian hometown, Osambert Jean started receiving calls from dozens of friends who also emigrated from southwestern Haiti to settle in this South Florida suburb nestled between the Atlantic Ocean and the Everglades.

“Each one of them has bad news: My family is injured or my house collapsed,” said Jean, a Haitian-born insurance agent in Boynton Beach whose brother lives in Les Cayes, Haiti. “People lost everything — everything.”

The suburb south of West Palm Beach holds deep ties to Les Cayes, a town in southwest Haiti hard hit by Saturday’s 7.2 magnitude earthquake, which has killed 1,941 people and injured 9,900 others.

Many residents here have been worried about their loved ones. Some are already mourning cousins and uncles who died while officials are trying to assess the needs, rallying the coastal town in the relief effort.

In the past decade, Boynton Beach has grown its Haitian population far from Miami’s Little Haiti and established a partnership with Les Cayes by welcoming officials, including a former mayor who was found dead under the rubble of a hotel that collapsed in the earthquake.

“This is something that is personal. We know some of these people. We have interacted with them. For me, this is my family,” said Christina Romelus, a city commissioner of Haitian descent, whose husband lost three relatives in the earthquake. “You are seeing that feeling of ‘there’s no where to go now. Home is destroyed. Home is gone.’”

The city has set up a donation center at the downtown fire station, where people have been dropping off medical supplies, personal protective equipment and tents.

Boynton Beach resident Cosy Joseph is flying to Les Cayes on Thursday to take some supplies to a rural clinic overseen by the nonprofit she runs, the Gaskov Clerge Foundation. But she says she is also checking on her 88-year-old father and inspecting her childhood home.

Joseph said she could not sleep Monday night after seeing images of children and elderly people standing outside in the rain as Tropical Storm Grace battered the region the quake struck.

“It was painful to watch,” Joseph said. “We are devastated and heartbroken. I had zero sleep. I just couldn’t.”

Joseph has been instrumental in keeping the sister city partnership between the Florida and Haitian coastal towns. Mayors and officials have traveled to Les Cayes at least four times since 2012.

Boynton Beach Mayor Steven Grant said the latest trip in 2018 involved possibly partnering with another diplomatic mission to work on an energy creation project. Joseph has joined two of the four trips.

More than half of the 1.08 million Haitians in the U.S. live in Florida. Palm Beach, home to Boynton Beach, has a sizable 100,000 people of Haitian origin, compared with Miami-Dade’s 140,000, according to the American Community Survey. Haitian churches and restaurants are spotted among the palm tree-lined boulevards.

One of these churches is headed by pastor Jean Bilbalo Joint, who is also originally from Les Cayes. Joint said about 400 members of his church attend services in Haitian Creole and the majority are from southwest Haiti.

Organizations in Miami’s Little Haiti are also raising funds and asking for donations of camping gear. Some have also seen personal losses in the most recent earthquake.

Reginald Jean-Mary, a pastor of Notre Dame d’Haiti Catholic Church, said his cousin, who is also a pastor, was officiating a baptism in the Church of the Immaculate Conception in the town of Les Anglais when the earthquake hit and helped pull people from the rubble of the church. Since then, he has learned of other members of his church who have lost loved ones.

Jean-Mary said his homeland had not been able to fully recover from the 2010 earthquake and 2016′s Hurricane Matthew. This earthquake struck just after a month after the assassination of President Jovenel Moïse.

“It has been brutal blows. This is very difficult for the people, for the country,” he said. “We are people of faith. We are people of hope. But I have to ask myself this question: Why?”