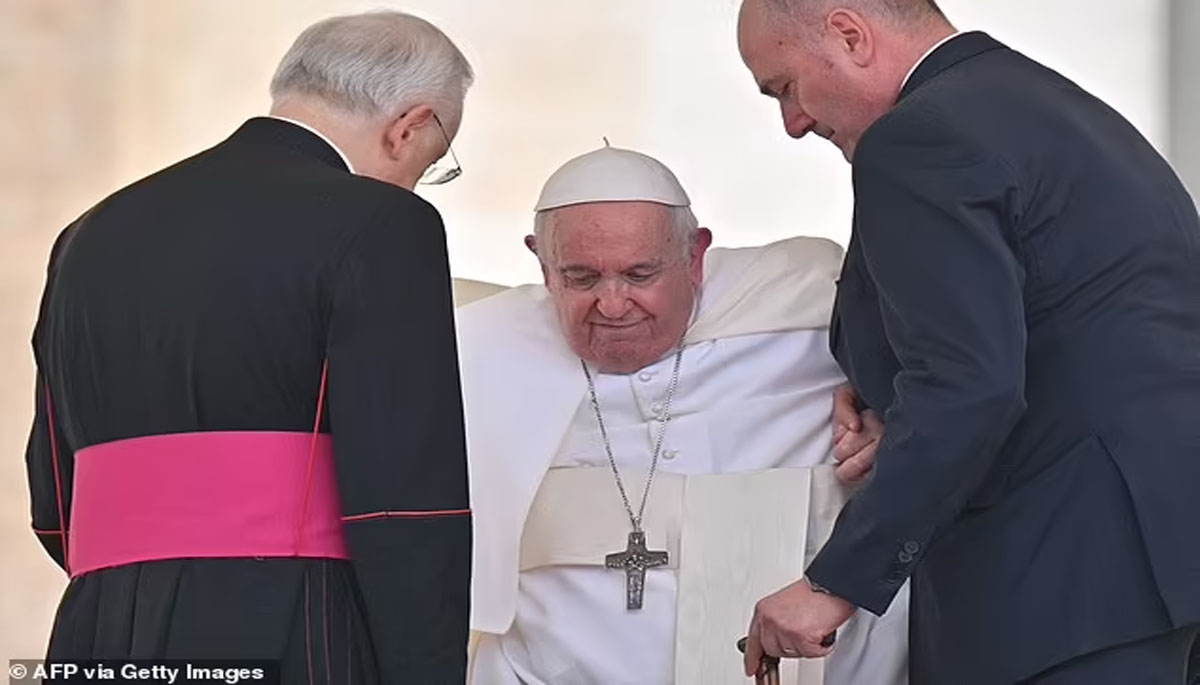 A frail Pope Francis had to be helped to his feet at his weekly audience today – days after speculation swirled over whether he was planning to resign. Rumours that the 85-year-old may resign began after he postponed a trip to Africa and announced an unusual meeting of cardinals.

Pictured at his weekly general audience at the Vatican today, the Argentinian spoke about how old age is ‘a time to find strength in frailty’ and encouraged the elderly to embrace their frailty and helplessness. He looked to be in visible discomfort while getting in and out of his chair and was accompanied by two aides.

Pope Francis was still able to give his weekly talk and greet the audience and also spoke about victims of the devastating earthquake in Afghanistan and violence in Mexico. Hobbled by pain in his knee and forced to use a wheelchair in recent weeks, the pontiff postponed a July trip to the Democratic Republic of Congo and South Sudan last week.

He also announced an unusual decision to hold a consistory to name new cardinals during a Vatican vacation month and arranged meetings to ensure his reforms stay intact.

The extraordinary consistory will be held on August 27, a slow summer month at the Catholic headquarters, to create 21 new cardinals – 16 of whom will be under the age of 80, thereby eligible to elect his successor in a future conclave.

Since becoming pope in 2013, the Argentine pontiff has created 83 cardinals in a move to shape the future of the Catholic Church, in part to counter Europe’s historically dominant influence, and to reflect his values. On August 28, Francis will then pay a visit to L’Aquila and the tomb of Celestine V – the first pope to have resigned from the papacy, in the 13th century.

He then joins the world’s cardinals – many of them meeting their peers for the first time – in two days of discussions over the reform of the Roman Curia, which Francis announced in March with the unveiling of a new constitution.

Francis’ shake-up of the Roman Curia attempts to shift the Church back towards its pastoral roots, allows lay Catholics to head Vatican departments and creates a dicastery specifically for charity works among other reforms.

The moves have triggered intense speculation about his plans for the future, including the most radical – that he was planning to step down. The resignation of a pope was once almost unthinkable until Benedict XVI renounced his reign in 2013, citing his declining physical and mental health.

In 2014, a year after being elected to replace Benedict, Francis himself told reporters that were his health to impede his functions as pope, he would consider stepping down too.