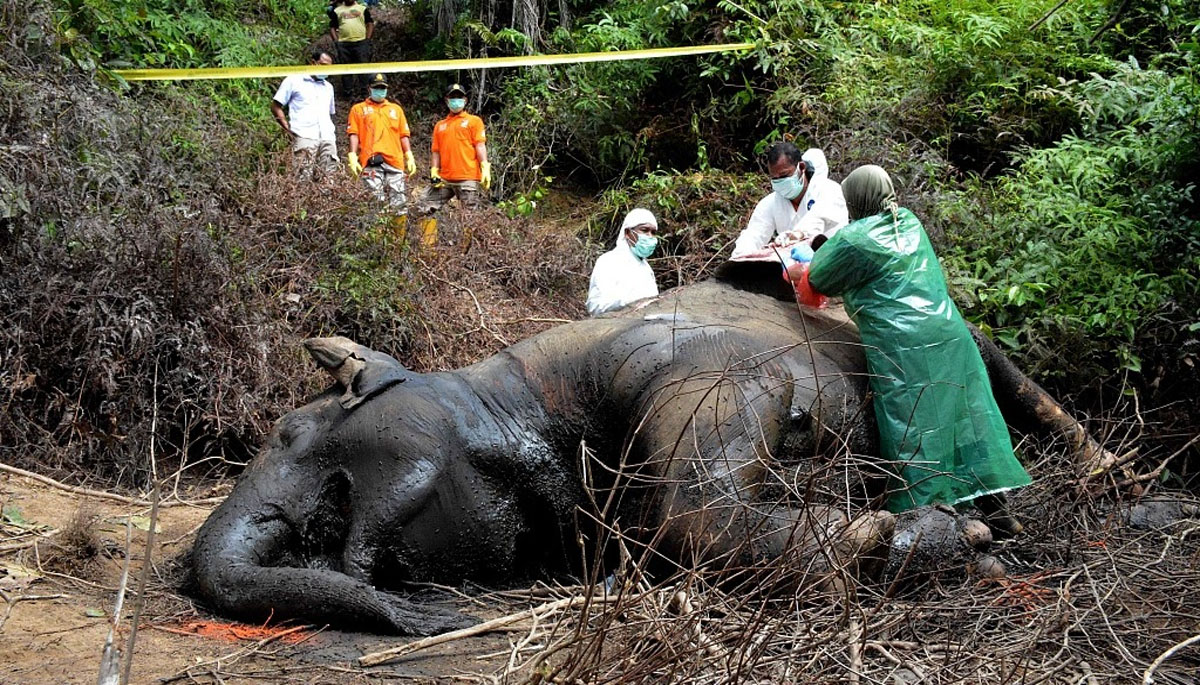 A critically endangered elephant and its unborn baby were found dead in western Indonesia after a suspected poisoning. Disturbing photographs show the animal with blood coming out of its mouth on the island of Sumatra.

Local authorities are now investigating the death of the pregnant elephant, which was due to soon give birth. Its corpse was discovered during a joint patrol by conservation groups on Wednesday. Conservationists suspect the incident may be linked to the palm oil industry, which they say consider the animals a pest.

‘From the sign of changes in the shape of its internal organs, such as the lung, it looks like it is burning, black and oozing from the blood,’ said Zulhusni Syukri, programme director of Rimba Satwa Foundation, one of the groups that found the dead animal.

Rimba Satwa strongly suspect the animal was poisoned as pineapple was found in its stomach, even though the tropical fruit does not grow in that area. There are already fewer than 700 Sumatran elephants remaining on the island. According to Indonesian forestry and environment ministry, the number has gone down from 1,300 in 2014 to 693 last year.

This is why the species is protected under an Indonesian law on the conservation of biological natural resources and their ecosystems. The decline has occurred amid a loss of more than 69% of the animal’s potential habitat in the last 25 years, the equivalent of one generation.

Sumatra has also seen the vast expansion of palm plantations, which has led to conflicts between humans and animals over space and resources. ‘The palm plantation workers near the elephants’ roaming paths often have conflicts with the elephants because they eat the palm fruit,’ Mr Syukri said.

At least seven Sumatran elephants have died in the province in the last three years, he added.