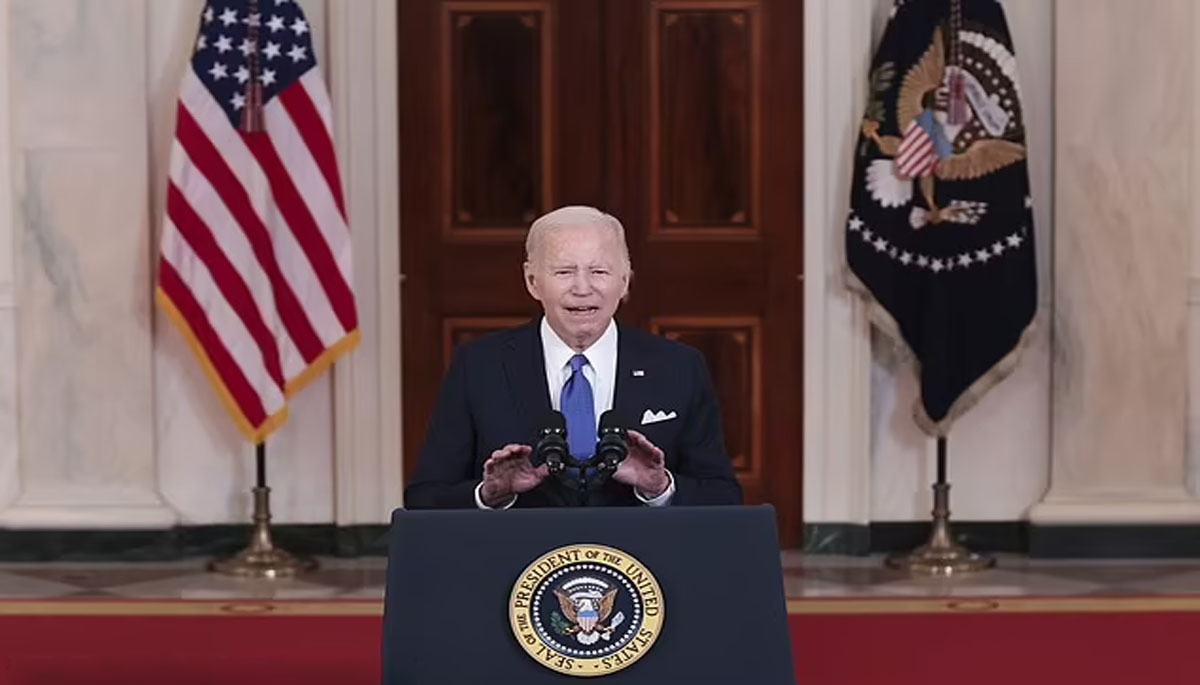 President Joe Biden flies to Europe on Saturday for two major international summits where world leaders will discuss the next steps in helping Ukraine battle the Russian invasion. He is due first in Germany for a G7 summit before flying to Spain for a meeting of NATO leaders.

Biden is under pressure to do more to support the government of Volodomyr Zelensky, amid accusations that he has been too slow to deliver aid. And it comes as Ukrainian forces are retreating from the battle in Donbas, outgunned by the Russian war machine.

While prime ministers and presidents of France, the United Kingdom, Germany and Italy have all visited the Ukrainian capital, the 79-year-old U.S. president has stayed away out of security concerns. ‘Turning up in Kyiv may not make a huge material difference to the war effort but it is symbolic of the way European leaders think that Biden is doing too much leading from behind,’ said a senior diplomat from a European Union state.

‘There’s a case to be made that the U.S. needs to be leading from the front.’ Some diplomats have also chafed at the way they see the U.S. has dragged its feet on supplying long-range weaponry – or fighter jets – for fear that it would anger Moscow. ‘We need Biden to be more forthright,’ said a diplomat from an allied nation.’

American officials dispute that assessment, pointing out that Washington announced on Thursday another $450 million in military aid. It included High Mobility Artillery Rocket Systems, tens of thousands of additional rounds of ammunition and patrol boats to help protect the coastline.

It brings the total support to more than $6 billion since Russia launched its invasion. John Kirby, National Security coordinator for strategic communications, said Biden would use a string of meetings to try to further isolate Russian leader Vladimir Putin and his allies.

‘Throughout the G7 summit in Germany and NATO summit in Spain, you’re going to see clearly how the president’s day-one focus on revitalizing alliances and partnerships has allowed us to seize this moment to benefit the American people, support Ukraine, and hold Russia accountable, all while staying focused on the other challenges that define the coming decades, and that includes the challenges posed by China,’ he said.

Zelensky is expected to address both summits by video link. It comes at a time when his forces in eastern Ukraine are under intense pressure. They have appealed for more ammunition, artillery and rockets to keep pace with Russia in what has become a long-range war of attrition. On Friday, one of Zelensky’s top generals told his U.S. counterpart that Ukraine needed ‘fire parity’ to stabilize the eastern Luhansk region.

‘We discussed the operational situation and the delivery flow of international technical assistance,’ Ukraine’s General Valeriy Zaluzhniy wrote on the Telegram app after a phone call with U.S. Chairman of the Joint Chiefs of Staff, General Mark Milley. It came as Ukrainian forces pulled back from the embattled city of Sievierodonetsk after weeks of bombardment.

Allies said they wanted Biden to bring US leadership to the summits. A spokesperson for the British embassy said: ‘During the G7 and NATO, we will be working with the US and all our Allies towards united and sustained commitments to Ukraine – on sanctions, military and economic support – to show Putin that our leadership will not falter in the face of his appalling and illegal invasion.’

A senior administration official said Biden will announce measures to increase pressure on Russia at the G7 before taking steps to tackle price rises around the world. ‘Third, leaders will also advance a vision of the world grounded in freedom and openness, not coercion, not aggression, not spheres of influence,’ said the official. ‘They will strengthen our cooperation on economic issues, cyberspace and quantum, and, in particular, the challenges posed by China.’

‘There are potential downsides in terms of alienating some of the other partners that the US and its allies need and want to continue to work with. ‘So one of the questions coming out of the G7 will be whether whether leaders are prepared to embrace this kind of framing of the challenges in its summit statement.’eur