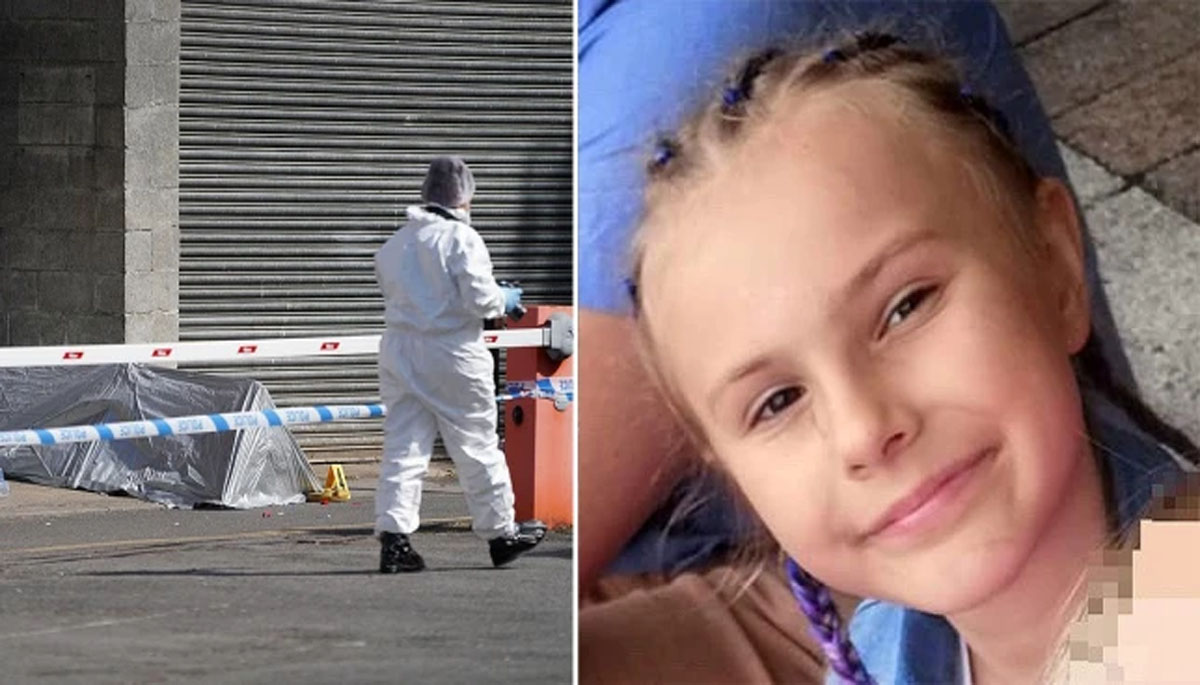 Lilia Valutyte and her sibling were outside with hula hoops and toy prams near their mother’s workplace in the town of Boston, Lincolnshire.

A witness explained that the girls were always trusted to play on the street as it was usually very safe. ‘Her mum had a business inside,’ the Sun was told.

‘She worked from a desk on her laptop and had been doing it for a couple of months. ‘It’s only a quiet street so she would let them play outside.

‘I think they had a hula-hoop and dolly’s pushchair. I’m sure she would have been inside.’ Lilia’s mother was reportedly first on the scene after the stabbing and tried desperately to save her daughter.

Her father, Aurejlius, had recently celebrated his birthday and been baked a cake by Lilia and her five-year-old sister. The family had proudly shared photos of the creation on social media.

A family friend told The Sun: ‘There is no humanity left in this place — none. For someone to do this is inhuman.’ Lilia’s parents are being supported by specially trained officers following her death.

Two people were arrested as part of a murder investigation following the ‘isolated incident’, which took place on Thursday evening.

Speaking on Friday, Chief Superintendent Kate Anderson said: ‘Our thoughts continue to be with Lilia’s family and friends.’ The senior officer had described the young girl’s death as an ‘utter tragedy’.

Ms Anderson had earlier declined to confirm Lilia’s nationality or comment on the details of those arrested and what they were detained on suspicion of. It is thought that Lilia and her family were Lithuanian.

At the scene late on Thursday night, a police car was stationed either side of an alleyway to cordon the area off to the public.

The leader of Boston Borough Council, Paul Skinner, said: ‘The town is united in mourning following the very sad and tragic death of a nine-year-old girl in Boston.

‘We can’t for one second imagine the pain the family and the young girl’s friends are going through and our heartfelt condolences go out to them.’ The council will fly a flag from the Municipal Buildings at half-mast following the tragedy.

Matt Warman, the Conservative MP for Boston and Skegness, said he had been in contact with the policing minister to ensure national assistance is available to the murder investigation.

Writing on Twitter on Thursday evening, he said: ‘Profoundly shocking news in Boston this evening. ‘I have spoken to senior officers locally and am hugely grateful for all the emergency services’ work.

‘I have also been in contact with policing minister Tom Pursglove to ensure that any national help that might be useful is made available as quickly as possible.’