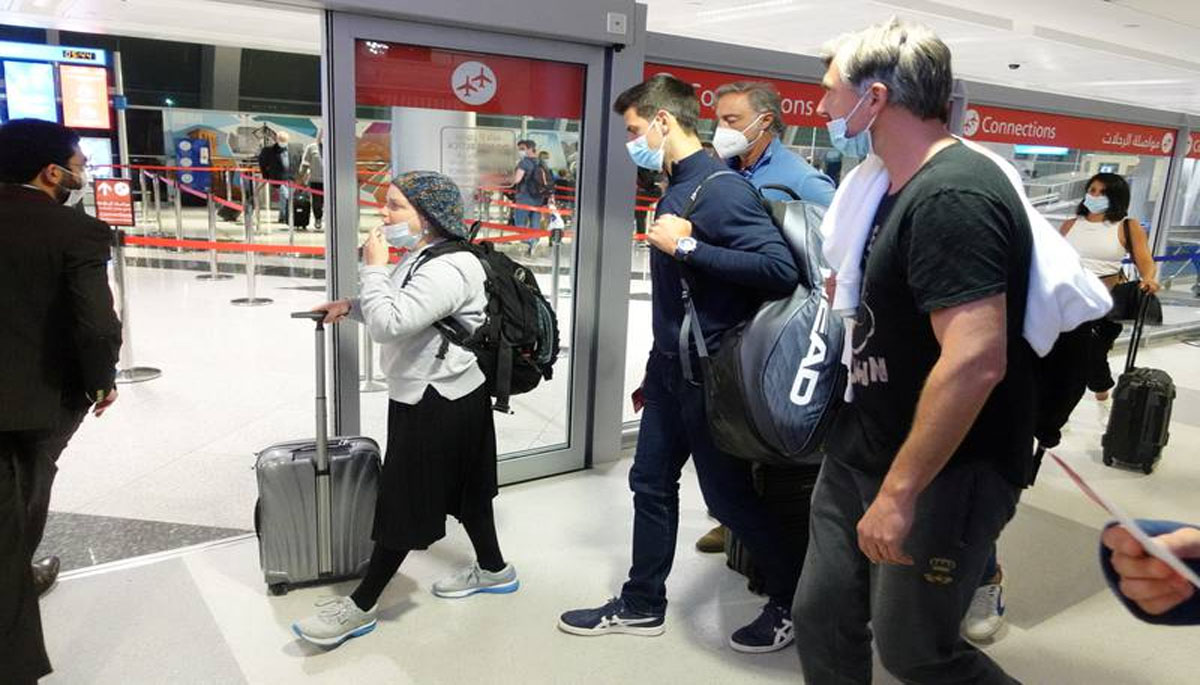 Novak Djokovic landed in Dubai early on Monday after his deportation from Australia over his coronavirus vaccination status thwarted his attempted bid at a record 21st Grand Slam title. With the Australian Open under way, the men’s defending champion – the Serb is a nine-time winner at Melbourne Park – stepped off an Emirates plane carrying two bags and wearing a mask, his final destination unknown.

He appeared relaxed and posed for selfies with at least two of his fellow passengers after disembarking. It follows a protracted legal battle between the unvaccinated Djokovic and the Australian government that polarised opinion and damaged reputations on both sides. Djokovic said he was “extremely disappointed” after a Federal Court unanimously upheld the cancellation of his visa on public order grounds. The humbled star boarded a flight from Melbourne’s Tullamarine airport for Dubai late Sunday, accompanied by a retinue of aides and officials including his coach Goran Ivanisevic.

Emirates flight EK409 took off at 10:51 pm local time (11.51 GMT), according to an AFP reporter on board, and landed before dawn in Dubai. Twice in the last 11 days Australia’s government had ripped up Djokovic’s visa and placed him in immigration detention – saying the unvaccinated star’s presence could fuel anti-vaccine sentiment amid a tidal wave of Omicron cases.

Twice the Serbian star fought the decision in court, winning one round but losing Sunday’s decider. With a few dry words, the chief justice of Australia’s Federal Court, James Allsop, ended a week of legal high drama that was followed around the world. “The orders of the court are that the amended application be dismissed with costs,” Allsop said. Serbian President Aleksandar Vucic was withering in his criticism of Australian authorities. “They think that they have by this, this mistreatment of 10 days, humiliated Djokovic, but they have humiliated themselves. Djokovic can return to his country with his head held high,” Vucic told a state media outlet.

Djokovic could now be banned from visiting Australia for three years. He is tied with Roger Federer and Rafael Nadal with 20 Grand Slam titles each. Djokovic’s compatriot Miomir Kecmanovic, who was set to face the nine-time champion in the first round on Monday, called the incident a “bitter pill to swallow”. “Our little Serbian team here in Melbourne is upset and disappointed,” Kecmanovic wrote on Instagram.