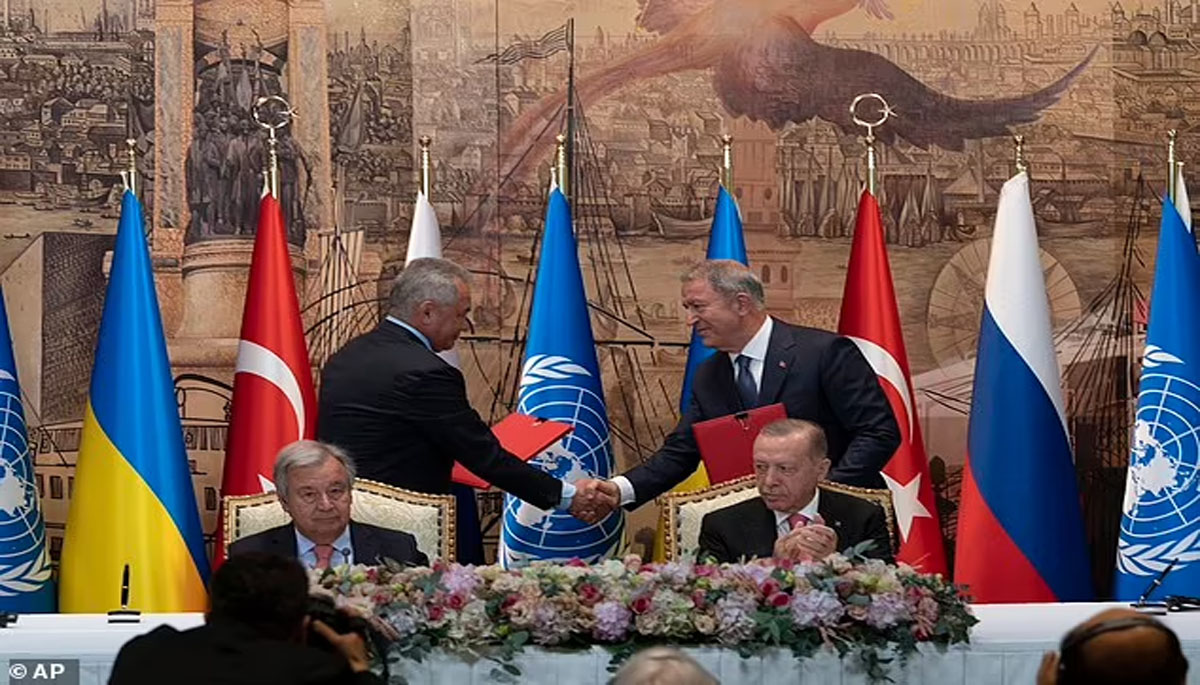 The UN and Turkey announced a deal with Russia and Ukraine on Friday to open up Black Sea shipping lanes and carry stockpiles of grain to a world in increasingly desperate need.

After weeks of delicate talks, Russia and Ukraine each signed agreements with Turkey and the UN raising hope of easing the hunger crisis triggered by the five-month war.

“Today, there is a beacon on the Black Sea, a beacon of hope, a beacon of possibility, a beacon of relief, in a world that needs it more than ever,” said UN Secretary General Antonio Guterres at a signing ceremony in Istanbul.

The deal is to reopen Ukraine’s Black Sea ports, unblocking millions of tonnes of grain stuck in Ukrainian ports since Russia invaded on February 24, raising hopes that a global food crisis triggered by Russia’s invasion can be eased.

Ukraine said earlier on Friday it would only sign an agreement with Turkey and the UN to resume grain exports that were disrupted by Moscow’s invasion, excluding any direct deals with Russia.

“Ukraine does not sign any documents with Russia. We will sign an agreement with Turkey and the UN,” presidential aide Mykhaylo Podolyak wrote on Twitter, adding that Russia would signing a separate “mirror” agreement.

He vowed a Ukrainian “military response” to any “provocations” from Russia and said Moscow’s ships and representatives would not be allowed in Ukrainian ports used for grain exports.

Russian presidential spokesman Dmitry Peskov said the looming food crisis meant it was “very important” to unblock the supply of fertilisers, food and grain to the world markets.

“It is very important that this grain reaches the world markets and that the indirect restrictions that apply to our products also allow the market to receive additional volumes of fertilisers, grain and so on,” he said.

Mr Podolyak said any necessary inspections of cargo ships “will be carried out by joint groups” in Turkish waters.

“The country’s delegation led by Ukraine’s Infrastructure Minister Oleksandr Kubrakov arrived in Istanbul for negotiations on the resolution of the grain issue,” Ukraine’s infrastructure ministry said on Telegram.

“The Secretary General once again expressed his support for the unblocking of Ukrainian ports and assured that security is an indisputable priority for the UN,” the ministry said.

Up to 25 million tonnes of wheat and other grains have been blocked in Ukrainian ports by Russian warships and landmines Kyiv has laid to avert a feared amphibious assault.

The blocked exports have sparked a surge in global food prices and raised fears of famine, particularly in the world’s poorest countries.

The blockade by Russia’s Black Sea fleet has worsened global supply chain disruptions and, along with western sanctions imposed on Moscow, stoked high inflation in food and energy prices since Russian forces swept into Ukraine on February 24.

The deal will relieve the global food crisis caused by blocked Black Sea grain exports. Up to 25 million tonnes of wheat and other grain have been blocked in Ukrainian ports by Russian warships and landmines Kyiv has laid to avert an amphibious assault.

The five-month war is being fought across one of Europe’s most fertile regions by two of the world’s biggest producers of grain. Almost all of the grain is shipped out of the region across the Black Sea.

Chicago wheat fell more than 3 per cent on Friday on expectations of higher supplies from the Black Sea region as Russia and Ukraine are due to sign a deal to open ports for grain shipments.