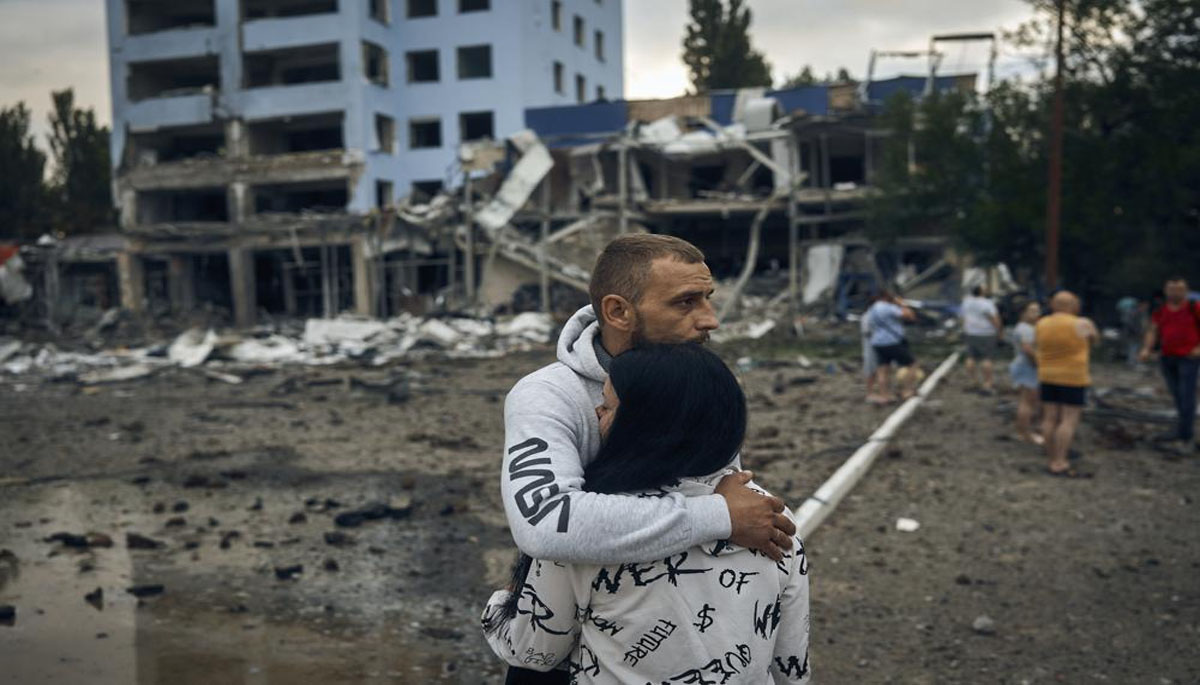 A couple reacts after the Russian shelling damaged supermarket, high-rise buildings and pharmacy in Mykolaiv, Ukraine.

Russian forces shelled a Ukrainian city close to Europe’s biggest nuclear power plant Thursday, reinforcing warnings from the U.N. nuclear chief that the fighting around the site could lead to a disastrous accident.

Dnipropetrovsk’s regional governor said Russia fired 60 rockets at Nikopol, across the Dnieper River from the Zaporizhzhia nuclear plant, which has been under Russian supervision since Moscow’s troops seized it early in the war.

Some 50 residential buildings were damaged in the city of 107,000, and residents were left without electricity, Valentyn Reznichenko wrote on Telegram.

Rafael Grossi, director general of the International Atomic Energy Agency, had warned on Tuesday that the situation was becoming more perilous daily at the Zaporizhzhia plant in the city of Enerhodar.

“Every principle of nuclear safety has been violated” at the plant, he said. “What is at stake is extremely serious and extremely grave and dangerous.”

He expressed concern about the way the plant is being operated and the danger posed by the fighting going on around it. He cited shelling at the beginning of the war when it was taken over and continuing instances of Ukraine and Russia accusing each other of attacks there.

Experts at the U.S.-based Institute for the Study of War said they believe Russia is shelling the area intentionally, “putting Ukraine in a difficult position.”

“Either Ukraine returns fire, risking international condemnation and a nuclear incident — which Ukrainian forces are unlikely to do — or Ukrainian forces allow Russian forces to continue firing on Ukrainian positions from an effective ‘safe zone,’” the think tank said.

The Russian capture of Zaporizhzhia renewed fears that the largest of Ukraine’s four nuclear power plants could be damaged, setting off an emergency like the 1986 Chernobyl accident, the world’s worst nuclear disaster, which happened about 110 kilometers (65 miles) north of the capital, Kyiv.

In northern Ukraine, the country’s second-largest city, Kharkiv, was shelled by the Russians, Ukraine’s presidential office said. Several industrial sites were hit in the city, which has been a frequent target. In the nearby city of Chuhuiv, a rocket hit a five-story residential building.

Fighting continued in the fiercely contested Donetsk region in the east, with Ukrainian authorities saying a school was destroyed in the village of Ocheretyne. The attacks have disrupted supplies of gas, water and power, and the region’s residents are being evacuated.

In the city of Donetsk, Russian-backed separatist authorities accused Ukrainian forces of shelling the central part of the city Thursday. The area hit was near a theater where a farewell ceremony for a prominent separatist officer killed a few days ago was being held. Donetsk Mayor Alexei Kulemzin said six people were killed.