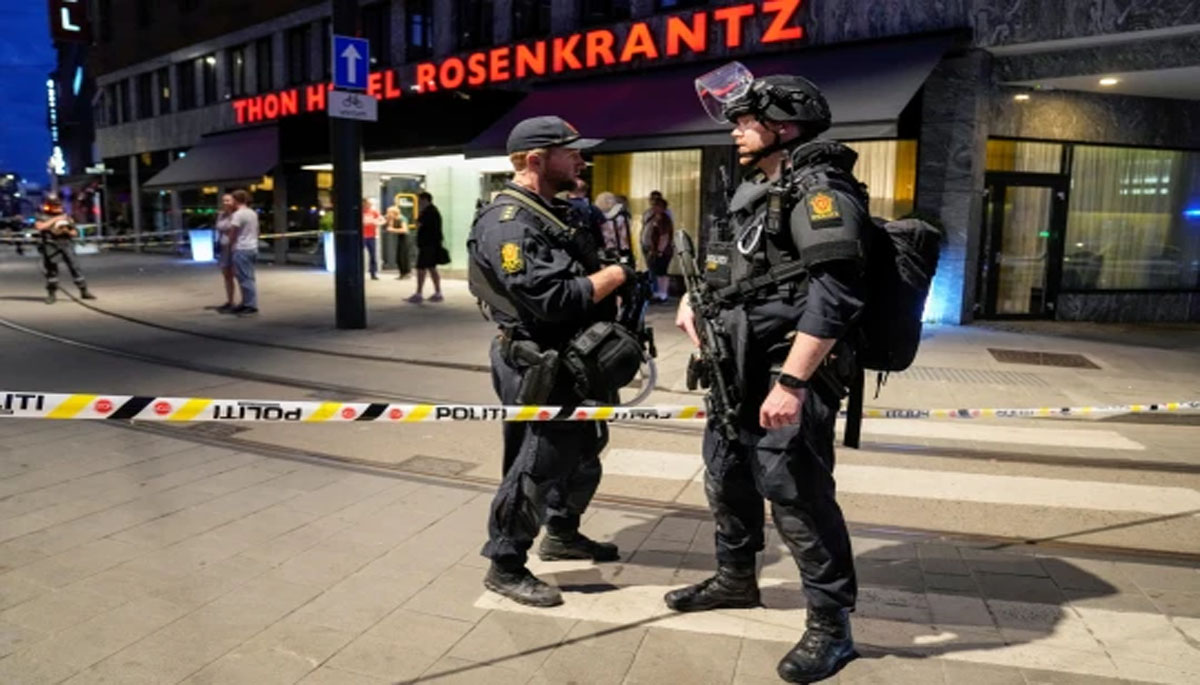 This morning, a city official confirmed the incident was being investigated as a possible act of terrorism. The shooting happened early on Saturday outside London Pub, a popular gay bar in the downtown area of the Norwegian capital.

Two died and 14 people were rushed to hospital following the incident, with three people in critical condition. A suspect, a 42-year-old Norwegian citizen of Iranian origin, was detained minutes after the shooting. Two weapons, including a fully automatic gun, were retrieved from the crime scene, police added.

People in Oslo had last night been gearing up for the city’s planned Pride events today. Norway had only recently marked the 50th anniversary since the abolition of a law that criminalised gay sex. ‘There is reason to think that this may be a hate crime,’ officers told a news conference today.

‘We are investigating whether the Pride was a target in itself or whether there are other motives.’ Following police advice, Oslo Pride organisers have made the difficult decision to cancel the planned Pride celebrations. In a statement, they said: ‘Oslo Pride therefore urges everyone who planned to participate or watch the parade to not show up. ‘All events in connection with Oslo Prides are cancelled.’

Norway’s Prime Minister Jonas Gahr Stoere has told his country’s LGBTQ+ community ‘we stand by you.’ He wrote on Facebook: ‘The shooting outside London Pub in Oslo tonight was a cruel and deeply shocking attack on innocent people.’ He said that while the motive was unclear, the shooting had caused fear and grief in the LGBTQ community. ‘We all stand by you,’ Mr Gahr Stoere added.

The man arrested following the shooting was apprehended near the scene, and was reportedly already known to police. The shooting began around 1:20am. Norwegian broadcaster TV2 showed footage of people running down Oslo streets in panic as shots rang out in the background. Oslo’s university hospital said it had gone on red alert following the attack.

Olav Roenneberg, a journalist from Norwegian public broadcaster NRK, witnessed the shooting. ‘I saw a man arrive at the site with a bag. He picked up a weapon and started shooting,’ he told NRK. ‘First I thought it was an air gun. Then the glass of the bar next door was shattered and I understood I had to run for cover.’

Norway is a relatively safe country but has experienced violent attacks by right-wing extremists. The country witnessed one of the worst mass shootings in Europe in 2011, when a right-wing extremist killed 69 people on the island of Utoya after setting off a bomb in Oslo that left eight dead. Anders Behring Breivik massacred young people attending at a youth camp on the island.

In 2019, another right-wing extremist killed his stepsister and then opened fire in a mosque but was overpowered before anyone there was injured. In May, a knifeman stabbed three people in ‘random’ attack in rural Norway. Three people were injured in the incident, which police spokesperson Odd Skei Kostveit said stemmed from a ‘family relationship’.