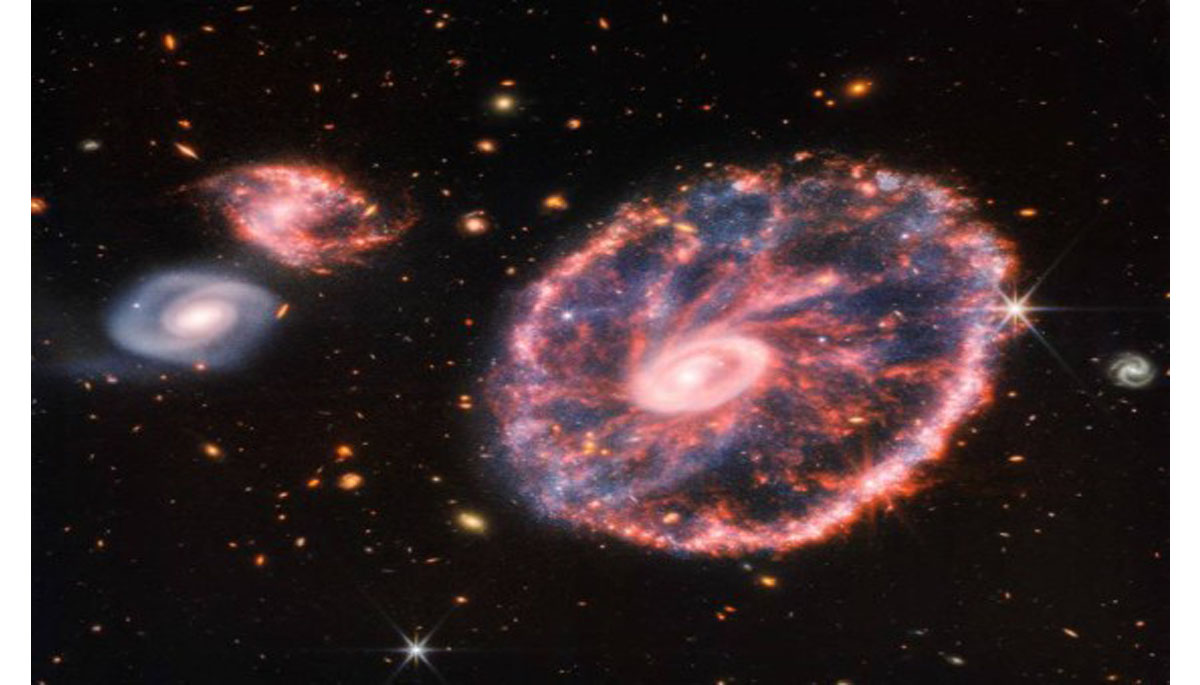 A composite image of the Cartwheel Galaxy captured by the James Webb Space Telescope on August 2, 2022. Photo: AFP / Nasa

A rare galaxy in the shape of a wagon wheel was captured by the James Webb Space Telescope. The Cartwheel Galaxy’s shape was caused by a high-speed collision between a large spiral galaxy and a smaller galaxy.

The image has helped to reveal new details about star formation, the black hole at the centre of the constellation and how the Cartwheel has changed over billions of years.

It is located 500 million years light years away, with two smaller companion galaxies also seen in the detailed shot.

“These two rings expand outwards from the centre of the collision, like ripples in a pond after a stone is tossed into it.

“Because of these distinctive features, astronomers call this a ‘ring galaxy’, a structure less common than spiral galaxies like our Milky Way.” Other telescopes, including the Hubble Space Telescope, have taken pictures of the galaxy before.

However, the Webb telescope has captured it in greater detail because of its ability to detect infrared light, radiant energy that is invisible to the human eye but which is felt as heat.

“Webb’s observations underscore that the Cartwheel is in a very transitory stage. The galaxy, which was presumably a normal spiral galaxy like the Milky Way before its collision, will continue to transform,” Nasa said.

“While Webb gives us a snapshot of the current state of the Cartwheel, it also provides insight into what happened to this galaxy in the past and how it will evolve in the future.”

The telescope was launched into space on Christmas Day, 2021, and has been sending back previously unseen views of the universe.

The first image from the telescope was revealed by US President Joe Biden on July 11. It showed the galaxy cluster SMACS 0723 as it was 4.6 billion years ago.

On July 20, it detected the oldest known galaxy in the universe, called Glass-z13, which was formed about 300 million years after the Big Bang 13.8 billion years ago.

This breaks the record set by its predecessor, the Hubble Space Telescope, which spotted GN-z11, a galaxy that was formed 400 million years after the birth of the universe.