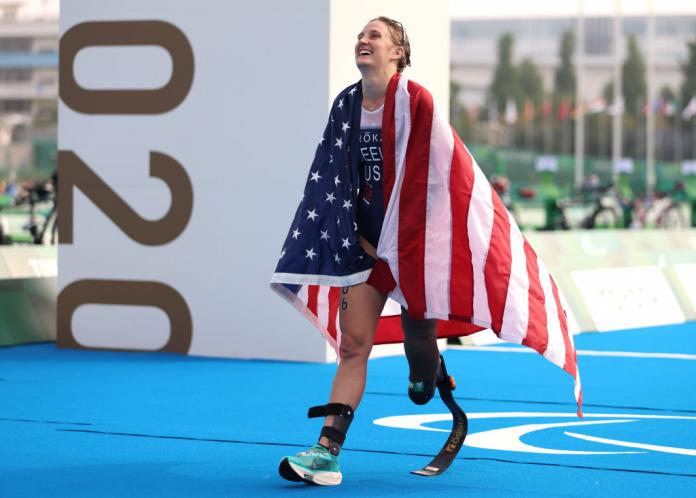 It was a one-two US finish in the women’s PTS2, with Allysa Seely edging Hailey Danz to add to her gold medal from Rio 2016. Italy’s Veronica Plebani took bronze.

Danz, who led in two of the three events, speaking about her second place finish said: “I pretty much executed my strategy that I wanted to do on the swim. I just maintained contact.

“My real goal was to create as much of a gap on the bike course (as possible) because I know that is my strength. That really is what the race is for me.

“I came off with a gap (after the bike) that I felt was going to be enough, but I guess I just didn’t have the run legs today.”

United States Brad Snyder clinched gold in the men’s PTVI triathlon competition. “It’s a big moment, because you spend so much time visualising and hoping, preparing for it. Just like in Rio and London (where he won gold in swimming), there’s no way you can possibly imagine how good it’s going to feel. And that really was a good feeling,” said a delighted Snyder, who had previously competed in the swimming.

“To be able to reach this level in a second sport is a really cool feeling. We watched Cool Runnings the other day and there’s this cool scene when John Candy talks what it means to have your life all about winning.

“My life is not about winning. It’s about challenge, it’s about taking on challenges, learning new skills, expanding my boundaries and capabilities. I really felt I was kind of tapped out in swimming. I don’t think there was a lot more I could squeeze out of my capability in swimming.”

Susana Rodriguez made history on Saturday after winning Spain’s first Paralympic gold medal in triathlon in the PTV1.

It was a strong return for Rodriguez, finished fifth at the sport’s Paralympic debut at Rio 2016.

“In the world of sports, this means everything,” Rodriguez said. “We (guide Sara Loehr) can do really good races, we can win world championships and each race has its own history. But there is nothing as big as the Paralympics.”