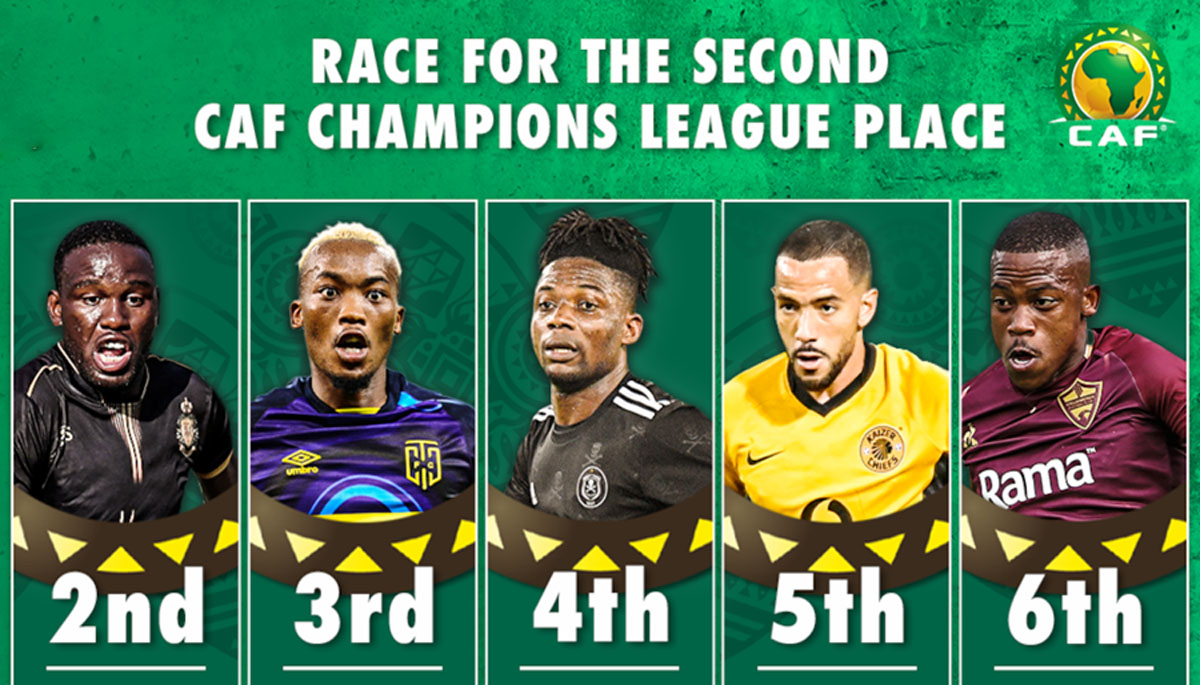 It is going down to the wire in the race for CAF club competition places next season, with the a number of clubs still in contention going into the final few rounds of the DStv Premiership season.

Mamelodi Sundowns have long tied up top spot and the secured a place in the CAF Champions League, but who will join them by finishing second is still an open question. There is also a heated race for third place, which gains entry into the CAF Confederation Cup next term SuperSport.com looks at who is still in contention for those places.

City have taken over second spot in the league with a three-point advantage over Royal AM, though they have now played a game more than their rivals. They will also still be kicking themselves over dropped points at Chippa United last week, when they dominated the 0-0 draw and missed a penalty late on.

But they do now look odds-on favourites to clinch the Champions league spot given their run-in and that of those around them. They host AmaZulu on Saturday and travel to Stellenbosch FC in their final game, both tricky fixtures but winnable. They probably need just another three points to be sure of second place.

City’s only previous season of continental football was in 2017/18 when they featured in the Confederation Cup after finishing third in their debut 2016/17 campaign. It seems likely that they will, at the very least, return to that competition.

Royal AM were not in action this past weekend as they were due to face Orlando Pirates, who instead played in the semifinals of the Confederation Cup.

It means they have three games remaining but those are against The Buccaneers (home), Lamontville Golden Arrows (away) and champions Mamelodi Sundowns (home), a tough run-in.

That is especially as they seem to be hitting their worst run of form at the worst possible time in the campaign having gone winless in four games (D2 L2). They need to somehow rally themselves and second place is still very much on, but it looks a tall order. Perhaps their focus instead is holding onto third and seeing off the challenge of those behind them.

Chiefs missed a golden chance to be well in the hunt for Champions league football with Keagan Dolly’s late penalty miss against Sundowns in Sunday. As it is, they now need to win both of their remaining games and hope City and Royal AM implode in their last few games.

It is highly unlikely, with their hopes now resting on a place in the Confederation Cup. They are two points behind Royal AM, but have played a game more. They have the easiest run-in though, on paper at least, as they travel to stuttering Sekhukhune United on Saturday and then host relegation haunted Swallows FC on the final day.

You would think there are two wins going begging there, but such has been the inconsistency of Chiefs this season, you can’t take anything for granted.

Successive draws against SuperSport United and Maritzburg United means Stellies are now rank outsiders for a place in the Confederation Cup. They will need to win their last two games and hope others slip up, but in all likelihood they will have to simply settle for a top eight place.

That will still be progress for a club that flirted with relegation last season, but there also might be the lingering feeling of what might have been as they threw away a large number of points this campaign.

Pirates are still mathematically able to finish second, but it would take them to win all three remaining games and for an extraordinary set of results to go their way for that to happen. But, as they stand on the brink of a Confederation Cup final, they could certainly make a return to that competition next season.

They are five points back from third-placed Royal AM with three games to go, and must play the Durban side still this campaign. That will give them the chance to cut that gap to two. Their other matches are against struggling Maritzburg United (home) and SuperSport United (away), two tricky but winnable games.

Having taken just two points from the last nine available in the league though, they need to buck up their domestic form in the final weeks.