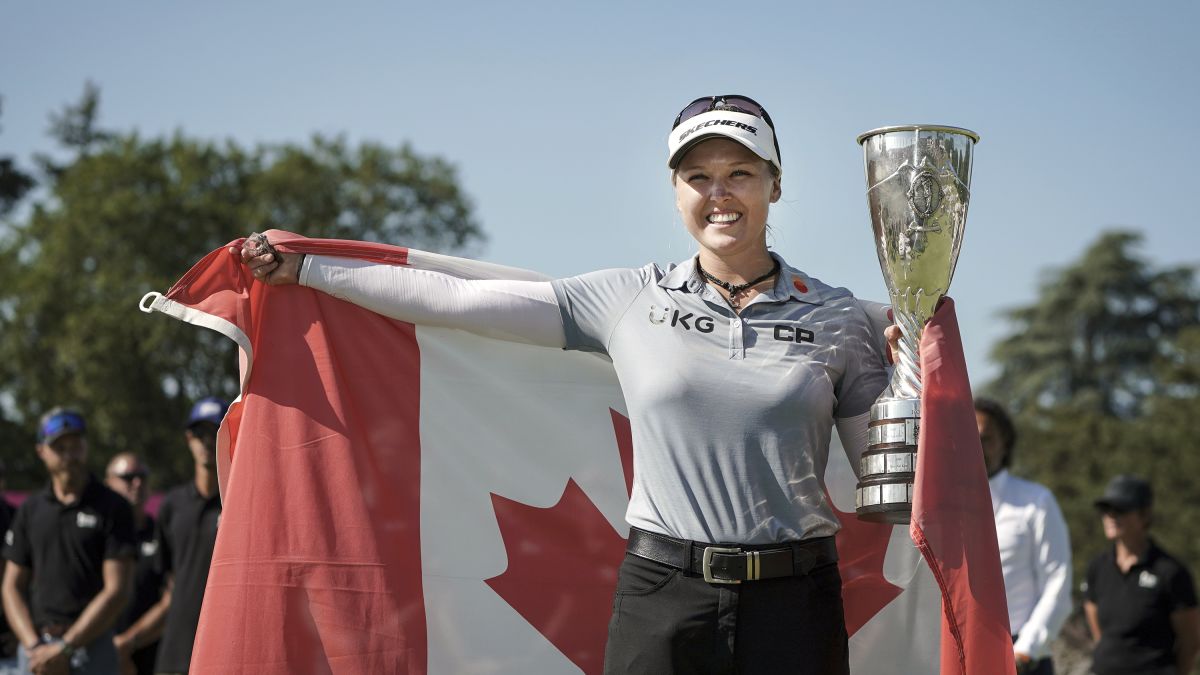 So much had happened in a chaotic final round of the Evian Championship — a spectator unwittingly picking up a stray ball, a pair of four-putts in the final group, a seven-way tie for the lead — that it was hard to know what to expect as Brooke Henderson walked down the fairway on the 72nd hole.

The Canadian was in a share of the lead with LPGA rookie Sophia Schubert and had just had a lucky escape when her wild hook off the tee at the par-5 No. 18 flew into trees and bounced out to relative safety.

Now in the middle of the fairway, could Henderson make birdie to win the second major title of her career, six years after her first at the Women’s PGA Championship in 2016 when she was only 18?

Henderson handled the pressure, hitting her third shot to 8 feet and rolling in the putt for an even-par round of 71. She was soaked in champagne by fellow players after clinching a 1-stroke victory that certainly didn’t come easy.

“Definitely not my best today,” Henderson said. “I just tried to stay patient and remind myself that I was still in it.

“I made some clutch putt and shots down the stretch which really helped.”

After all, Henderson went into Sunday with a 2-stroke lead and having barely been out of position all week at Evian Resort Golf Club in rounds of 64, 64 and 68.

That was wiped out after the first hole, though, thanks to a birdie from playing partner So Yeon Ryu (73) and a bogey from Henderson.

So began the weirdness of the final round of the fourth major of the year, when there were 13 changes to the lead.

At No. 5, Ryu had a double bogey to gift Henderson a 3-stroke lead. At the next hole, Henderson also four-putted for a double and saw her lead slip to one.

By that time, Olympic champion Nelly Korda — who started 6 shots behind Henderson but was soon only 3 behind — had pushed her approach shot into the rough near a path and seen a spectator wander up to the ball and pick it up.

The ball had to be replaced to a best estimate of where it was picked up, and Korda went on to make a double of her own.

Henderson was knocked out of the lead for the first time — if only briefly — when Schubert made birdie at No. 12 to move onto 15 under, breaking a seven-way tie for first place.

Henderson managed to keep pace with Schubert with birdies at Nos. 14 and 15, and a clutch par putt at No. 16.

The pair were tied for the lead after reaching the 18th, with Schubert playing in the group ahead of Henderson.

Schubert played it better but her birdie putt came to rest barely an inch from the cup — she had to settle for a 68 — just after Henderson had sent away her ugly drive.

Henderson chipped out into the fairway and pulled off her fourth birdie of the day, three of them coming in the final six holes.

“I stayed pretty patient, as patient as I could under the circumstances,” Henderson said. “Going into the back nine, the saying is that majors are won on the back nine on Sunday so I just tried to keep that frame of mind and knew I was still in it if I had a solid back [nine].”

Schubert, who started the final round four off the lead, almost won in just her second major as a professional. Playing her first year on the LPGA Tour, she hadn’t had a top-10 finish before this week.

Korda, who holed from a greenside bunker for eagle at No. 9 and somehow found herself in that seven-way tie for the lead, made eight pars and a bogey in her back nine and finished tied for eighth — four behind Henderson — after a 69.