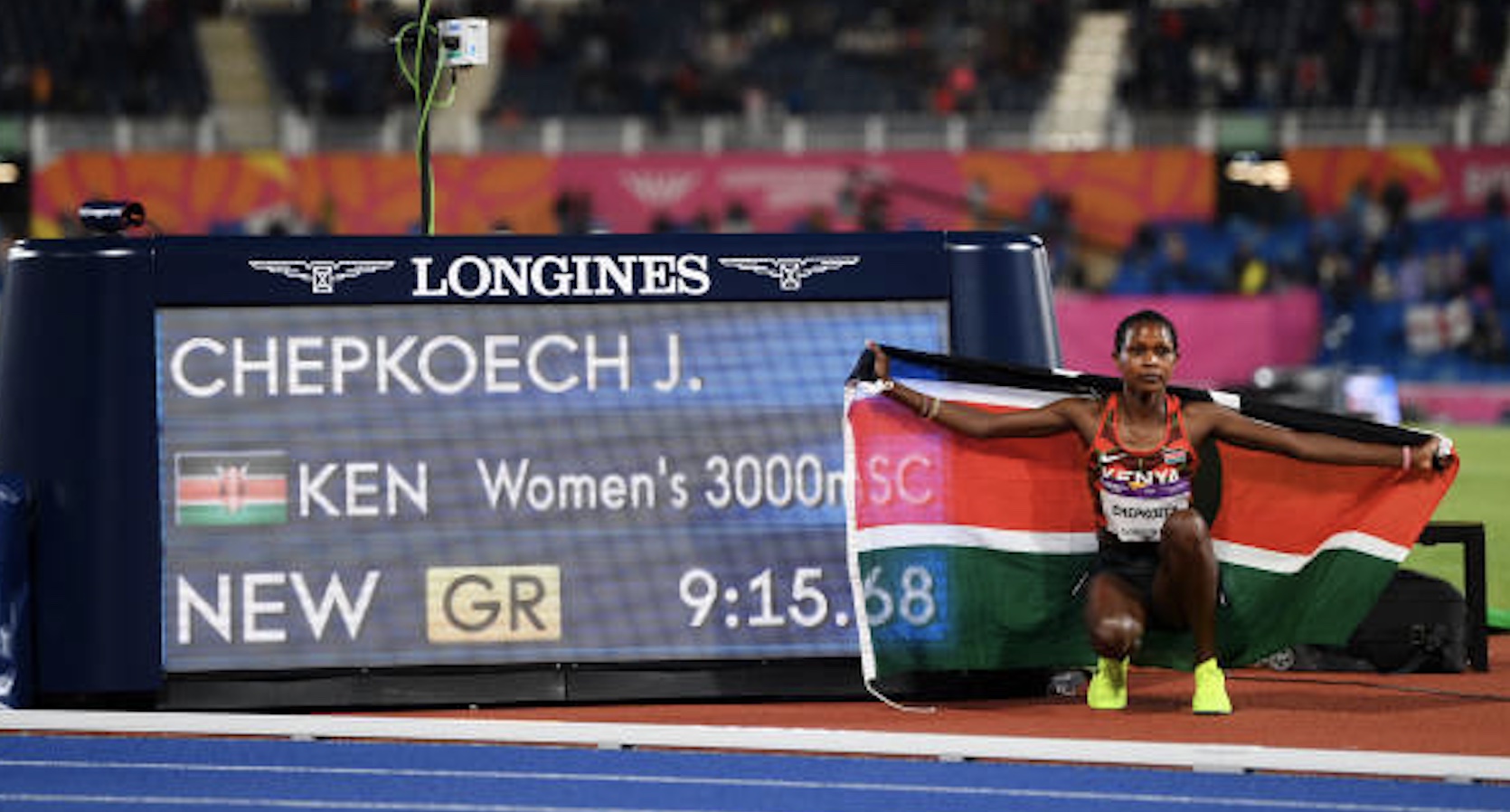 Jackline Chepkoech of Team Kenya celebrates a new Games Record and winning the gold medal next to the time board in the Women's 3000m Steeplechase Final on day eight of the Birmingham 2022 Commonwealth Games at Alexander Stadium on August 05, 2022 on the Birmingham, England. (Photo by Shaun Botterill/Getty Images)

Jackline Chepkoech dominated the race, and hugely benefited from Olympic champion Peruth Chemutai’s fall, to clinch the 3,000m steeplechase title at the Commonwealth Games in Birmingham on Friday.

The 20-year-old Chepkoech won the race in a new Games Record time of 9:15.68 in a race ion which she dominated from the start.

Olympic champion Chemutai of Uganda tripped and fell in the second last lap of the race and this afforded the Kenyan some space to secure the gold. Chemutai struggled to finish the race and was beaten to silver by England’s Elizabeth Bird who earned a lifetime best time of 9:17.79 while the Ugandan earned bronze, clocking 9:23.24.

“I am really happy to have won today. It was not going to be easy especially running alone but I am more than grateful for the gold medal. It is like a dream come true for me,” she said after the race.

Chepkoech’s tactic worked to the tee, as she bolted out straight from the gun and dominated the race from start to finish. She created a seven-second gap between her and the leading pack, with Chemutai sticking by her side.

The two kept exchanging leads, taking turns to keep the pace high and prevent the chasing group from catching up with them.

But on the penultimate lap, the Ugandan miscalculated her jump on a barrier, tripped and fell, and that was the point Chepkoech took to storm away.

She created a gap of almost 40m despite Chemutai waking up and struggling to catch up. At the bell, she was away and gone.

Behind her, Chemutai wasn’t able to continue in the same pace as she seemed injured from the fall, Bird cheered on by the partisan home crowd to add some pace and pass her for silver.

She just managed to hold on for bronze, benefiting hugely from the early race pace that had set her and the Kenyan far off the rest of the pack. She had to be wheeled away on a wheelchair, but she had a medal to show for her pains.