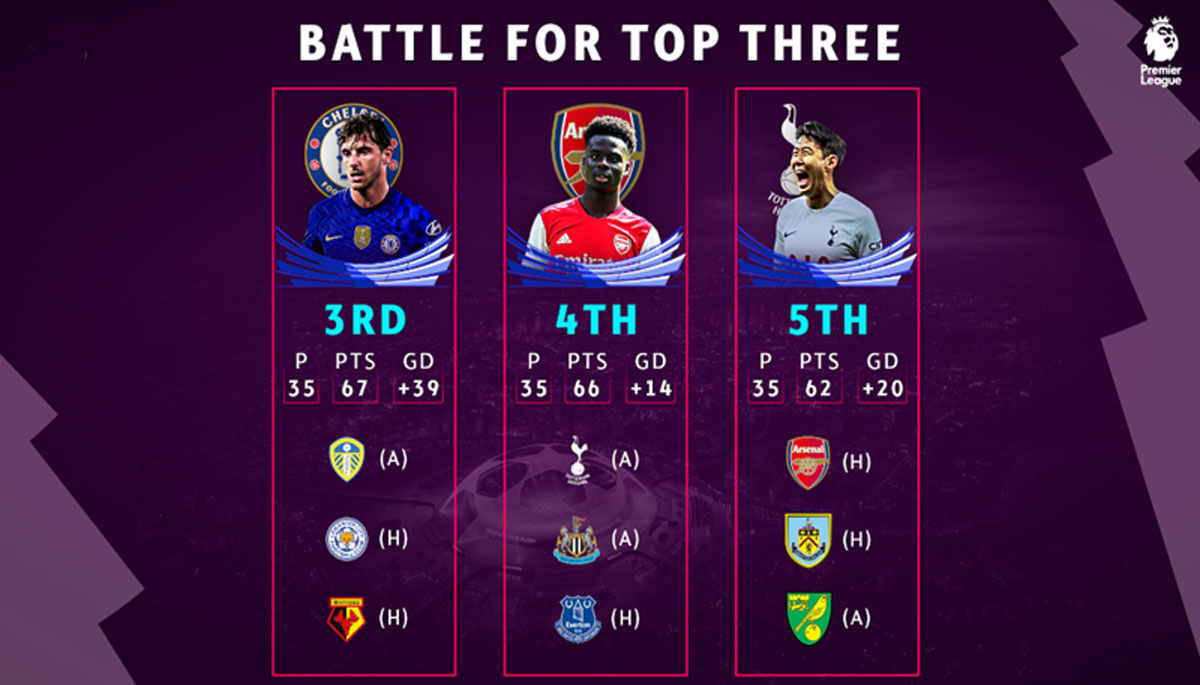 With Manchester United and West Ham having fallen off the Champions League wagon, the battle for third and fourth now involves London giants Chelsea, Arsenal, and Tottenham.

However, Thomas Tuchel’s side seem to have third place well in their clutches, which makes fourth spot a straight shootout between bitter rivals Arsenal and Spurs for a place in the Champions League. Here, supersport.com looks at who needs what from their final three games.

Chelsea occupy third place, one point clear of Arsenal in fourth, and five points clear of Spurs in fifth. If they can win their remaining games they should have enough to secure their current position.

The Blues face Leeds next and will hope history can play to their favour. Leeds are winless in their last seven meetings with Chelsea in all competitions (D2 L5), since a 2-0 home win in December 2002.

Chelsea have won just 11 per cent of their away league games against Leeds (5/46) – of all sides they’ve travelled to at least 15 times, the Blues’ lowest win rate in their league history is at Leeds.

Mikel Arteta’s charges are four points clear of Tottenham and play Antonio Conte’s side next in a crucial north London derby. If they beat Spurs, Arsenal will be seven points clear of them with two games to go, so the Gunners would be guaranteed a minimum of fourth place.

If the match ends in a draw, they would still be four points clear of Spurs and could then secure fourth before they even play Newcastle next Monday if Tottenham lose at home to Burnley.

If that match at the Tottenham Hotspur Stadium were to end in a draw on Sunday, the Gunners would need a point from their trip to St James’ Park.

For Spurs, they must win all of their remaining games to claim fourth, and that begins with their match against Arsenal at the weekend.

Their hopes could be shattered if they lose even one match, while draws won’t be enough either. In truth, it probably all comes down to the north London derby; if Spurs lose, that would see Arsenal seal fourth.

If Spurs manage a draw, they would need to win both of their remaining fixtures and hope the Gunners drop points against Newcastle and Everton.