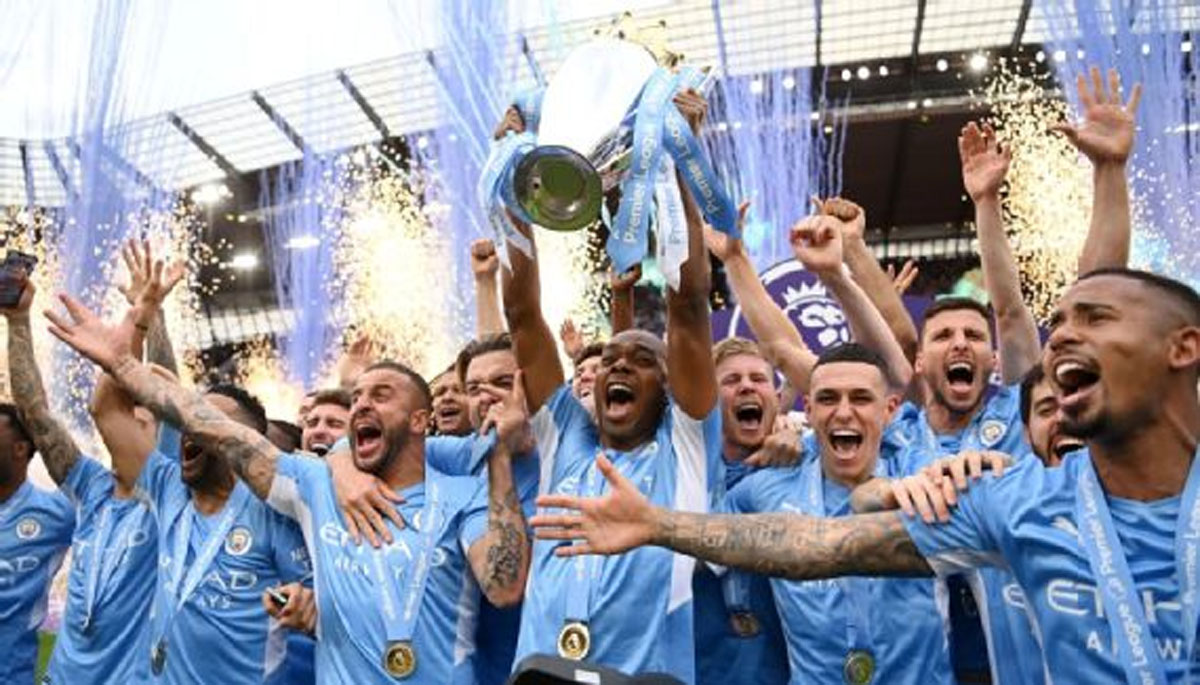 Manchester City staged a stunning late comeback with three goals in five minutes to beat Aston Villa and win the Premier League as their title chances looked to be slipping away amid dramatic scenes at Etihad Stadium.

Pep Guardiola’s side needed victory to secure their fourth title in five seasons but were facing the prospect of ending the season empty-handed as goals either side of the interval from Matty Cash and Philippe Coutinho put Villa 2-0 ahead and in control.

It looked as if Villa manager Steven Gerrard might help his former club Liverpool secure the title – until City turned the game on its head in at atmosphere bordering on hysteria. Ilkay Gundogan, on as a substitute for Bernardo Silva, gave City hope with a far-post header in the 76th minute, and Etihad Stadium was a wall of noise when Rodri drove a low finish past Villa keeper Robin Olsen two minutes later.

The title-winning recovery was complete with nine minutes left as Gundogan once again arrived at the far post to put City in front, the decisive contribution on this nerve-shredding final day. City did need those three points as Liverpool beat Wolverhampton Wanderers – with City boss Guardiola overcome with emotion and breaking down in tears at the final whistle.

Man City show the grit and class of champions

When Coutinho slid in Villa’s second goal, it looked as if the most unpalatable of storylines was being written for Manchester City. The notion of this supremely talented side ending the season with nothing was in clear view as City knew they had 21 minutes to score three times.

The headlines were being written in large type with Gerrard, who never won the Premier League title during his long career at Liverpool, directing the trophy to Anfield in another guise, helped by his former Anfield team-mate Coutinho.

And then, in one of the most dramatic twists of any Premier League title race, City knocked down the door that had been firmly slammed in their face by a supremely well-organised Villa. City looked crestfallen but showed their class and character once Gundogan gave them hope with that header, scenting their chance, even though some of their fans still feared this might only be a consolation.

Rodri’s equaliser was the transformative moment, a sense of inevitability sweeping around as fevered stadium, with a mixture of disbelief and elation the result of Gundogan slid home the third. Villa did not know what had hit them and had no response, supporters flooding on to the pitch when referee Michael Oliver sounded the final whistle in a deafening din.

Manchester City have had their character questioned this season, especially when they let the Champions League semi-final against Real Madrid slip from their grasp, but there can be no more doubts after this.

The manner in which they turned this game around with the title – and their entire season – on the line was the perfect answer. They were heading towards the most bitter disappointment but transformed this day into one they and their supporters will remember forever.