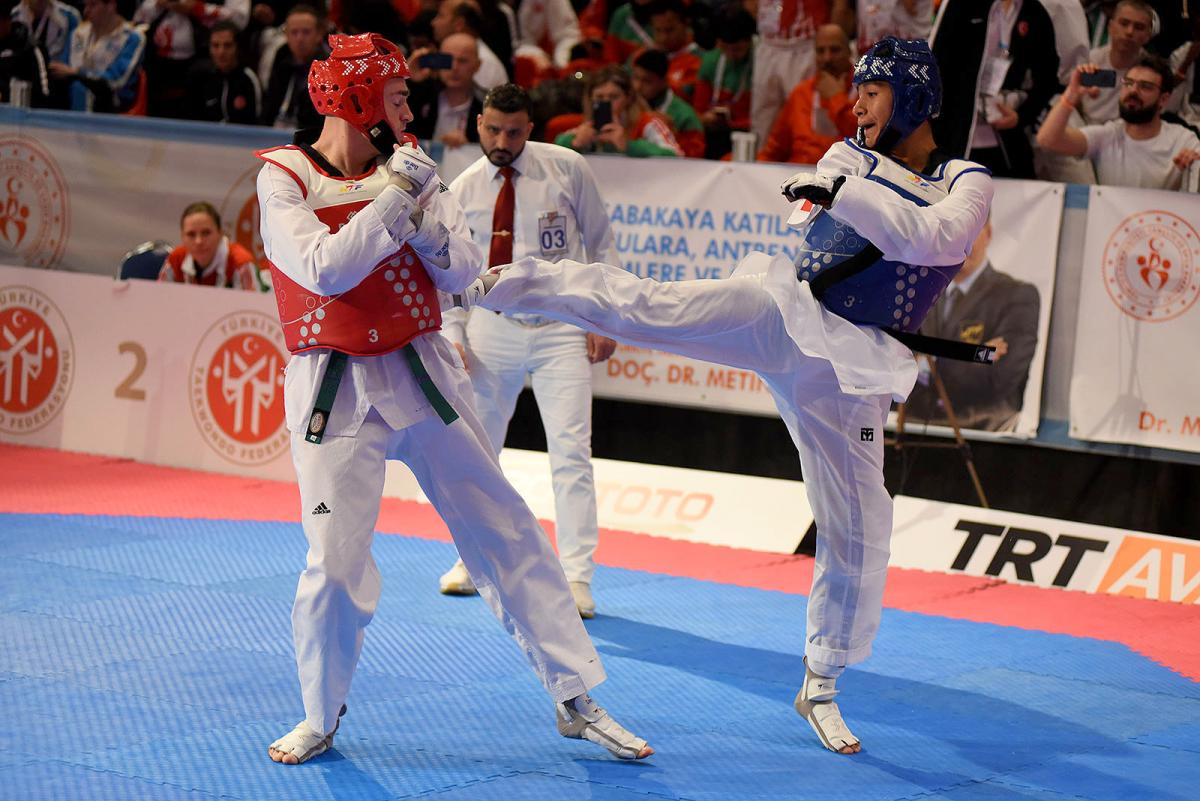 Top fighters would be out to dazzle the world with their speed and skills when Para Taekwondo makes its debut at the Paralympic Games in Tokyo on Thursday, September 2, 2021.

An action-packed schedule is lined up with 71 fighters to vie for the six gold medals over the next three days at the Makuhari Messe Hall. The sessions will start with the Round of 16 matches with two finals to be played each day in the evening session. Medallists of Men K44 -61kg and Women K44 -49kg will be decided on the opening day.

European & Asian medal hopes
Four-time world champion Bolor-Erdene Ganbat will be the biggest name in action on the opening day in men’s K44 -61kg division. Being one of the most technically gifted players, he is Mongolia’s top medal prospect and will be expected to deliver on the day.

Europe will rest their medal hopes on France no. 1 Bopha Kong, the four-time World and three-time European Champion, who would look to put up his best show in Tokyo. With Spain’s four-time world champion Alejandro Vidal Alvarez also to compete in the same division, a Kong-Alvarez rivalry is set to be renewed.

France’s Bopha Kong is a four-time World and three-time European Champion
Turkey’s 2019 European champion Mahmut Bozteke and Russian Paralympic Committee Daniil Sidorov, a former European champion, would be other names to watch out for in the category.

Keen contests
The men’s K44-75 kg division would be one of the keenly contested events with several World Champions waiting to show their best movements. Mehdi Pourrahnama, the Iranian Hurricane, will be one of the biggest names in action on the final day, September 4, 2021. With four World Championships, six Asian Championships and two IWAS World Games titles, he has remained simply unbeatable.

Kazakhstan’s Nurlan Dombayev, who is a two-time world champion, three-time Asian and two-time European champion, Dombayev, will be keen to add the Paralympic title to his glittering cabinet. The presence of the talented Ibrahima Seye from Senegal and Morocco’s Mohammed Aatif will give hope to the African nations for a medal.

Hosts Japan will rest their hopes on Shunsuke Kudo, the bronze medallist at last World Championships, in the division. Besides they will also have Mitsuya Tanaka competing in men’s K44 -61kg division.

In men’s K44 +75kg division, Iran will rest their medal hopes on former world champion Asghar Aziziaghdam, while Turkey’s Mehmet Yakut would be aiming to shine in K44 division from K43 a category he has picked up the World and European titles. Croatia’s former World Champion Ivan Mikulic should be also among the mix.

Seasoned stars to hog the limelight
In women’s event, Great Britain’s Amy Truesdal and Denmark’s Lisa Gjessing will be among the top fighters competing in Tokyo.

Truesdale, the gold medallist in 2014 and 2017 Para Taekwondo World Championships, would be the one to beat in the women’s +58 kg K44 event. The three-time European champion though should be challenged by top fighters in the division, including three-time world champion Aynur Mammadova of Azerbaijan, Morocco’s three-time African champion Rajae Akermach and two-sport phenom Shoko Ota from Japan. Still, the top ranked Truesdale remains the favourite for gold in the category.

Gjessing, the veteran with four World and European titles, would be the favourite for the women’s -58kg K44 title. The 43-year-old, who lost her hand as a result of a tough battle with cancer, would be eager to add the elusive Paralympic title to her glittering cabinet.

In lower division, Ukraine’s Viktoriia Marchuk stands out with her five World titles and four gold medals in European Championships in -49 skg K43 category. She would look to finish on top in the new category – K44, after having shone at the 2018 Pan American Open Championships with a bronze.

However, the road wouldn’t be easy with the presence of Mongolian fighter Enkhtuya Khurelbaatar, No. 1-ranked and former world champion, and Turkey’s Meryem Cavdar, a two-time European champion and London 2017 Worlds bronze medallist.

New generation faces
Besides the seasoned names, the Makuhari Messe Hall in Tokyo will witness the skillful young fighters who would be eager to make a mark in Paralympics. Leading the list of Para Taekwondo’s newest generation of stars is Mexico’s Juan Diego Garcia Lopez, who showed great form in 2019 capturing his first World title at just 16 years of age before adding a Parapan Am Games gold.

Also watch out for the 20-year-old China’s Yujie Li who would be keen to add a Paralympic medal to her 2019 World title in women’s K44-58kg event.