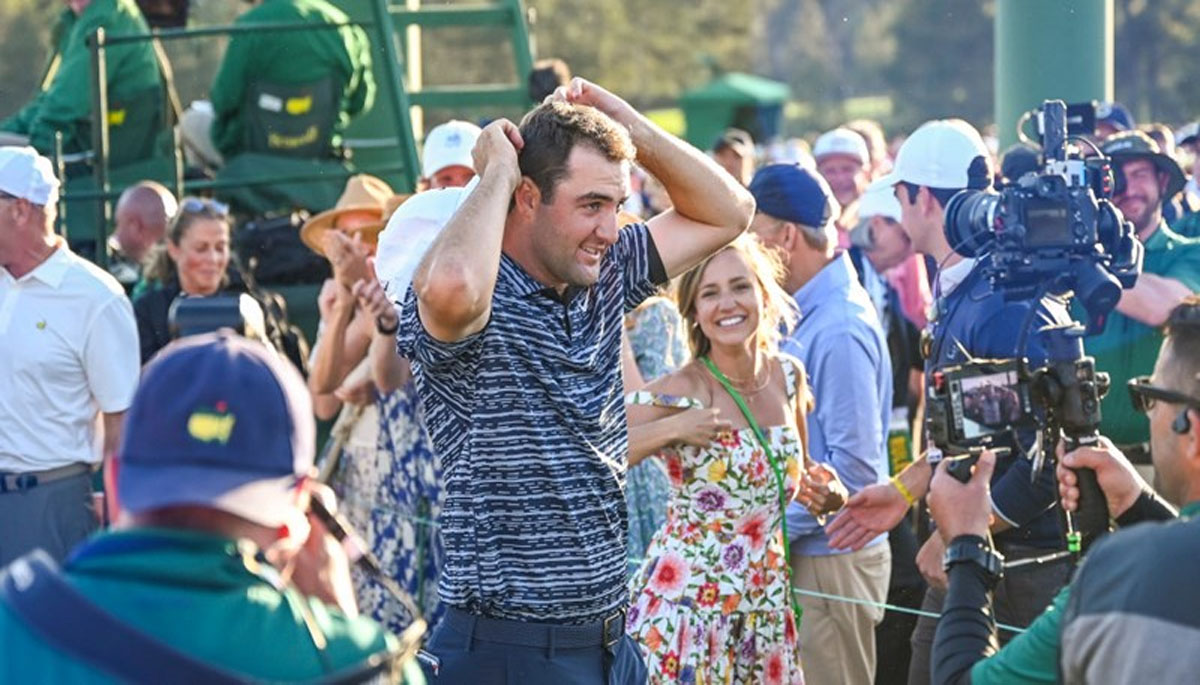 Scottie Scheffler, the world’s No 1 golfer, was crying and stressed out hours before Sunday’s final round of the Masters, feeling overwhelmed and convinced he wasn’t ready to win the green jacket.

The 25-year-old American, the poster of keeping calm and carrying on while upon the course, shook off his anxiety to win his first major title on Sunday at Augusta National.

But it didn’t happen until Scheffler listened to his wife Meredith, examined his issues, collected himself and trusted in his shotmaking skills.

“I cried like a baby this morning,” Scheffler said. “I was so stressed out. I didn’t know what to do. I was sitting there telling Meredith, ‘I don’t think I’m ready for this. I’m not ready, I don’t feel like I’m ready for this kind of stuff,’ and I just felt overwhelmed.”

Meredith fixed him breakfast and he relaxed. She gave him verbal nutrition for his confidence as well.

“She told me, ‘Who are you to say that you’re not ready?’” Scheffler said. “And so what we talked about is that God is in control and that the Lord is leading me and if today is my time, it’s my time. And if I shot 82 today, somehow I was going to use it for His glory. Gosh, it was a long morning.”

Scheffler said he relaxed when he arrived at Augusta National and felt on his game after chipped 26 yards at the first hole to set up a three-foot par putt.

Scheffler, who won his first US PGA title only eight weeks ago and took his fourth on Sunday, said he had never endured such angst before a final round, especially carrying a three-stroke advantage into the last round of the event he most dreamed about winning since boyhood.

“I think because it’s the Masters,” he said. “I dreamed of having a chance to play in this golf tournament. I teared up the first time I got my invitation in the mail. I love this golf course.

“This would be the tournament I would want to win. You don’t know how many chances you’re going to get.

“I don’t know if you get better opportunities than that. You don’t want to waste them.”

Just before 2021 champion Hideki Matsuyama of Japan slipped the green jacket symbolic of Masters supremacy on his shoulders, Scheffler said he was glad for needing three tries from inside five feet on the 18th green to hole his last putt.

“I’m kind of glad I had a little hiccup there on the last hole,” he said. “It made me a little less emotional.”

NOT A MEMORABLE CHAMP?

Low-key Scheffler said he might not be recalled with more flamboyant Masters winners such as Tiger Woods, who attracted bigger crowds most of the week with his amazing comeback from severe leg injuries suffered in a car crash 14 months ago.

“The human condition is to make things bigger than they really are,” Scheffler said. “And years from now I would say people may not remember me as a champion and that’s fine. But in the moment, you think it’s a lot bigger deal than it really is.”

Scheffler, who tightened his grip on world No 1 with a breakthrough major triumph in a week where five rivals could have dethroned him, said he never imagined he would be regarded as the world’s top golfer.

“I never expected to be sitting where I am now,” Scheffler said. “You don’t expect things to come to you in this life. You just do the best that you can with the hand you’re dealt and just go from there.

“I never really thought I was that good at golf, so I just kept practicing and kept working hard and that’s just what I’m going to keep doing.”