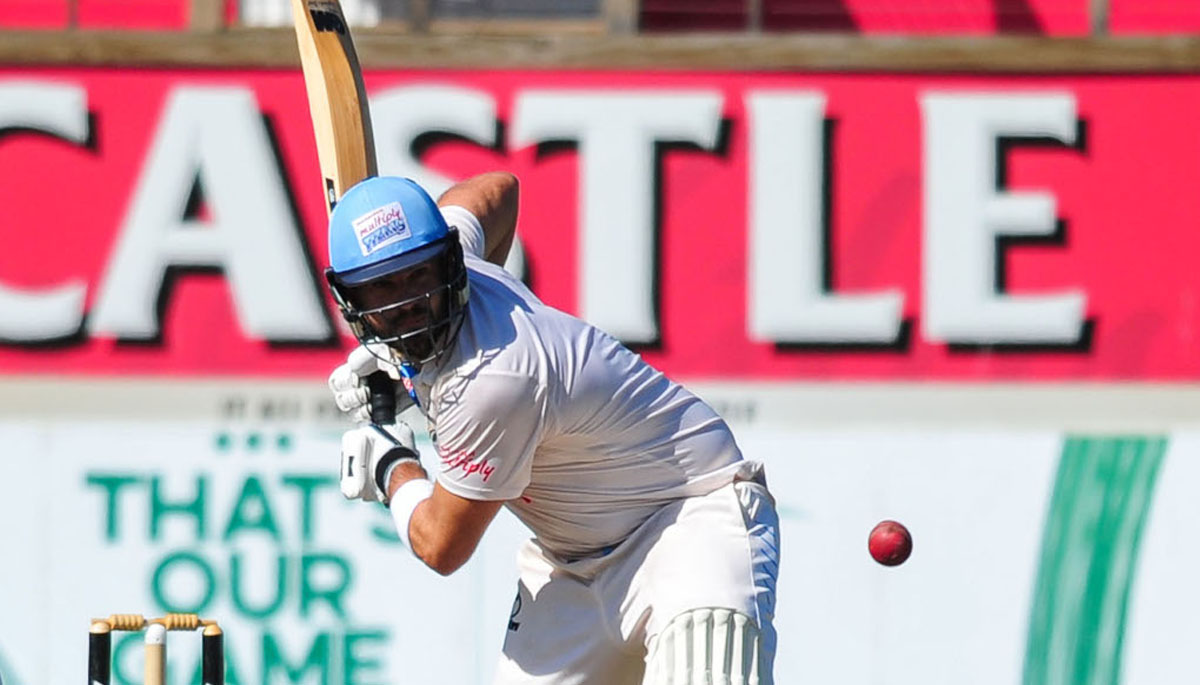 Mpumalanga Rhinos used only two spinners on day three of their four-day match against Tuskers at Uplands College on Saturday.

The spin duo of team captain Alexander Kok and former SA Under-19 player Kgaudise Molefe took 10 wickets in 43 overs as they restricted Tuskers to 171 runs in their second innings. Rhinos won the match by 162 runs.

Rhinos began day three with Tumi Koto (15*) and Liam Peters (2*) at the crease, having lost the wicket of Alexander Kok late on day two. Koto and Peters’ 43-run second-wicket partnership was looking threatening before Matthew Pollard provided Tuskers with a breakthrough, taking the wicket of Tumi Koto. After losing Koto, Rhinos struggled to get going, losing three wickets in quick succession.

Rhinos captain Yassar Cook, who was awarded Player of the Match for his first innings knock of 169 from 194 balls, was unable to replicate his heroics in the second innings. The 28-year-old was dismissed for 17 runs by Michael Erlank. Erlank also took the key wickets of Liam Peters and Glen Adams. Erlank took four wickets from his 17 overs.

Schlemmer, who cleaned up the Rhinos tail, also took four wickets on day three, though he was a little more expensive than Erlank. Schlemmer’s economy was 4.2 runs an over while Erlank’s economy was 3.4 runs an over.

Rhinos were bowled out for 196 and had a healthy lead of 333 runs. Twenty-seven-year-old Tumi Koto top-scored for Rhinos with his 31 runs from 65 balls.

Tuskers barely got going in their second innings as they lost early wickets. Rhinos spinners Alexander Kok and Kgaudise Molefe made early inroads, dismissing the Tuskers’ top four batters for only 27 runs.

2019 SA Under-19 allrounder Andile Mogakane put up a spirited defence, playing counter-attacking cricket, but it was not enough to save the match for Tuskers. Mogakane top-scored for Tuskers with a quickfire 49 from 45 balls. Mogakane and fellow allrounder, Tian Koekemoer, had a 64-run fourth-wicket partnership, Tuskers’ highest. Tian Koekemoer faced 74 balls for his 33 runs.

Alexander Kok was Mpumalanga Rhinos’ most successful bowler. The 23-year-old spinner who broke Koekemoer and Mogakane’s partnership took seven wickets in his 22 overs. The Rhinos captain had an economy of 3.68 runs an over. His bowling partner, Kgaudise Molefe, took three wickets in his 21 overs. He had a slightly higher economy of four runs an over.

Grant Thomson and Divan Posthumus’ half-centuries helped Eastern Storm build a healthy lead of 226 runs in their contest against Eastern Cape Iinyathi on the third day of their four-day match at Willowmoore Park, Benoni, on Saturday.

Eastern Storm had bowled out Eastern Cape Iinyathi for 161 in their first innings earlier in the day. Eastern Storm ended day three with a second innings score of 211 for nine.

Eastern Storm stumbled early on in their second innings, losing quick wickets. Opener Aron Visser was dismissed for 11, Amaan Khan was back in the change room for a three-ball duck and the captain, Wesley Coulentianos, was dismissed for 13.

Seasoned campaigner Grant Thomson stabilised the Eastern Storm’s innings with a solid innings of 63 runs from 86 balls. Grant Thomson was on the Titans’ books during the 2018/19 season. He was also named by the Paarl Rocks and Nelson Mandela Bay Giants for the 2018 and 2019 Mzansi Super League editions, respectively.

Divan Posthumus, who is playing in his third first-class match, scored his second first-class half-century late on day three before he was dismissed by Joshua Dodd almost immediately afterwards. The 27-year-old played a watchful innings, facing 135 deliveries for his 55 runs.

Joshua Dodd was Eastern Cape Iinyathi’s most successful bowler, taking three wickets with his medium pacers in his 10 overs. The 25-year-old struck twice in three balls, dismissing Tumelo Tlhokwe and Devon Botha in one over.

Bad light stopped play with Eastern Storm on 211 for nine. Tailenders, Gionne Koopman (0*) and Khwezi Gumede (0*) were at the crease at stumps. Eastern Storm leads Eastern Cape Iinyathi by 226 runs with one wicket remaining.