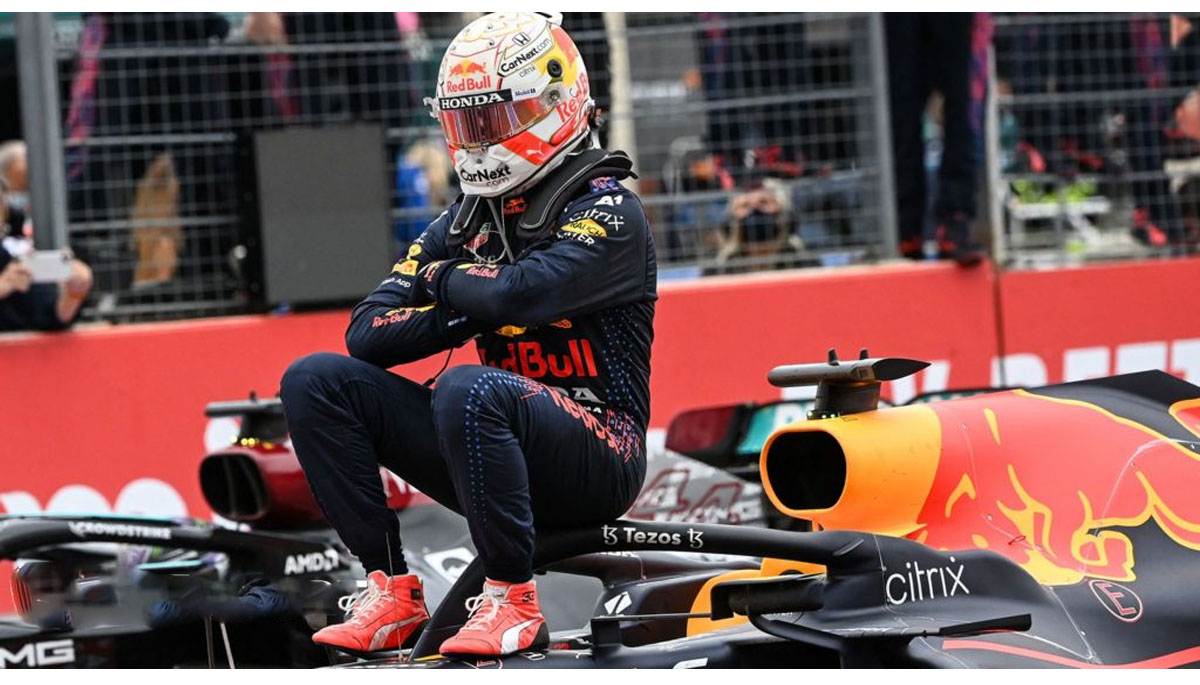 Championship leader Max Verstappen posing after he eased to a comfortable win in the French Grand Prix on Sunday.

The accident on lap 18 of 53 turned the outcome on a scorching afternoon at Circuit Paul Ricard in the south of France.

Verstappen assumed the lead and duly blasted to his seventh win of the 12-race-old season, with Mercedes second and third through Lewis Hamilton and George Russell.

Then upshot was that Leclerc plunged from 38 points behind the defending champion Verstappen to 64 – a yawning gap that spells alarming damage to Ferrari’s hopes of securing their first drivers’ title since for 15 years.

After the accident, mid-corner at the fast Turn 11, Leclerc said over the radio: ‘I cannot go off throttle.’ It is not clear precisely what he meant. He then let out a primeval roar of ‘NOOOO.’

No wonder, for it was an almost unbelievable error – one to which he owned up when he faced the press. Happily, he was uninjured and walked back to the paddock crestfallen.

‘It was just a mistake,’ said Leclerc.

Before his brain-fade, Leclerc appeared to have the race in his pocket, having started from pole and withstood early pressure from Verstappen, who went in for his first stop two seconds off the Monegasque leader.

Hamilton could be relieved with his runners-up place after qualifying fourth – nearly a second off the pace. But after reacting less decisively than Verstappen once the safety car deployed for Leclerc’s car to be recovered was withdrawn.

It was over as a contest. Hamilton finished 10 seconds short.

Yet more drama at Ferrari: their unsafe release of Carlos Sainz into the path of the Williams, as a host of cars used the Leclerc-induced safety car to get a cheap stop. Their sangfroid was clearly wavering.

Sainz was handed a five-second penalty for the infringement, hampering his sprint up the from 19th on the grid. He finished fifth.

Russell fought hard for third after. First, he tangled with Perez late on. Russell wanted Perez to hand him a place ‘back’. But, in truth Russell was never ahead. The team knew it. Boss Toto Wolff said: ‘George keep your head down. You can hunt him down.’