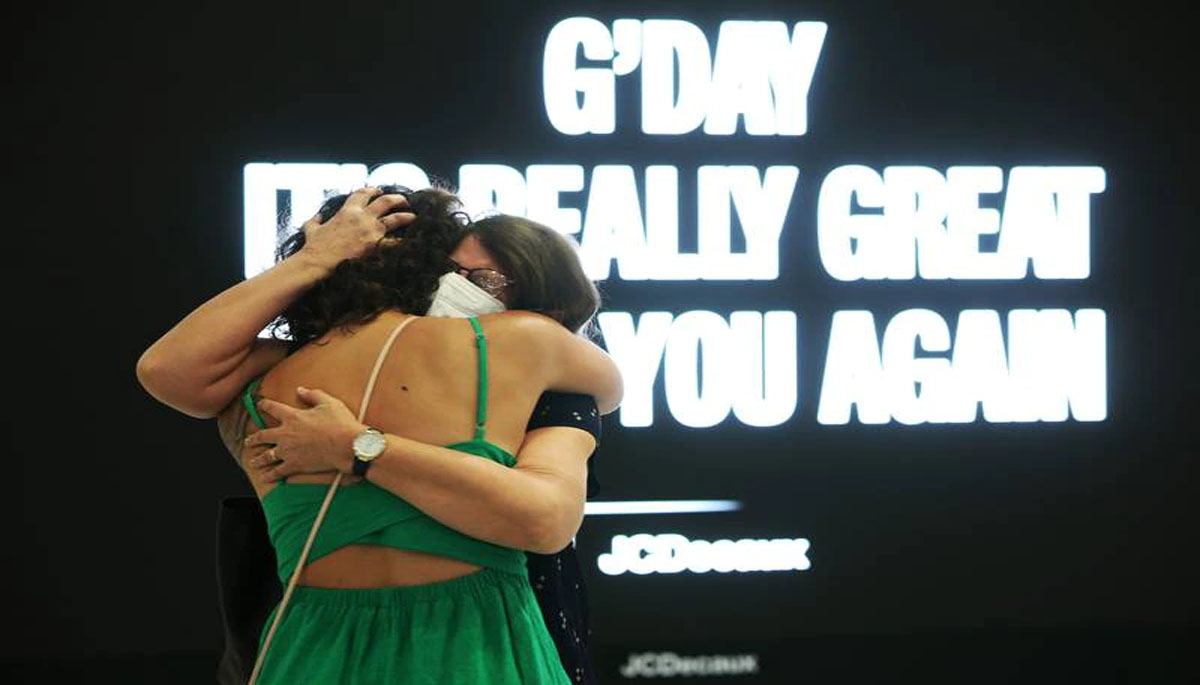 After nearly two years of being closed to most foreigners, Australia has finally reopened to the world. A Qantas flight from Los Angeles touched down in Sydney at 6.20am local time on Monday, marking the start of several friend and family reunions following the easing of pandemic-related restrictions.

Australia is welcoming fully vaccinated international travellers from February 21 for the first time since closing its borders to all non-citizens and non-residents in March 2020, in a move to limit the spread of Covid-19. Vaccinated tourists can fly Down Under and more than 50 international flights will arrive into the country on Monday, including 27 bound for Sydney, Australia’s largest city.

Passengers flying into Sydney Airport were greeted with “Welcome Back World!” lettering painted on a sign near the runways. People dressed in kangaroo costumes were on hand to greet passengers in the airport, alongside a DJ playing music under a banner that read “You were worth the wait”.

“It is a party out here, music playing, smiles on people’s faces, they will be dancing soon, I’m sure,” Tourism Minister Dan Tehan told broadcaster ABC from Sydney Airport. Quarantine rules previously meant any eligible arriving passengers had to isolate in government-managed facilities. These restrictions have also been dropped in most states.

Most of Australia is now open to visitors except Western Australia, which has stricter measures in place and will remain closed until March 3. Travellers in Melbourne also arrived to a welcome committee that included two of the city’s top chefs. Frank Camorra of MoVida and Shane Delia of Maha were handing out personal invitations to dine at their respective restaurants.

Flights from Singapore, Phuket, Auckland, Delhi, Doha, London, Dubai and Tokyo are set to land in Melbourne throughout the day. The return of international tourists marks a critical turning point for aviation and will underpin the recovery of Victoria’s tourism industry, said Melbourne airport’s chief of aviation Lorie Argus.

“International airlines are already responding positively to the border changes, with a number of them looking to resume or increase flights to Melbourne,” she said. Qantas — the national airline of Australia — operated its first flight this morning from Los Angeles, marking what will be the first of many long-awaited reunions for friends and family.

“It is a very exciting day, one that I have been looking forward to for a long time, from the day that I first shut that border right at the start of the pandemic,” Prime Minister Scott Morrison told reporters in Tasmania, an island state that relies heavily on tourism.

The airline said it expects to fly more than 14,000 passengers into Australia this week, with more flights landing today from eight overseas destinations including Vancouver, Singapore and London.

“It’s fair to say we’ve all been waiting a long time to welcome visitors back to Australia,” said Qantas chief executive Alan Joyce. “The thousands of international tourists arriving this week and many more over the coming months will help kickstart the tourism industry which has done it tough for the past couple of years.”

The airline is also relaunching several routes in the coming weeks including services to Hawaii, India, Singapore and the Philippines.

Travellers from the UAE are among those keen to get back to Australia, with data from online travel agency Skyscanner showing that February is the most popular time for travel and that Melbourne is the most coveted Australian destination for visitors from the UAE.

Emirates airline has said it would ramp up capacity on flights to Australia from Dubai after noting a rise in travel demand to the country. Etihad Airways will also operate more flights to Sydney and Melbourne in late March, meaning the national airline of the UAE will fly 14 weekly flights between Abu Dhabi and Australia.